The focus of this review is on a book that I read as a child, picked up in my grade school library because the cover caught my attention. It was also my first introduction to mountain lions. Yellow Eyes, originally published in 1937, by American writer Rutherford George Montgomery is a fictional story of a young cougar called Yellow Eyes who is orphaned along with his litter mates when a hunter kills their mother. The book follows Yellow Eyes from a young kitten to an adult cougar as he fights to survive and escape the hunter called Cougar George who relentlessly pursues him after a pack of hunting dogs kill his siblings.

Getting my hands on a copy of the classic and rare book was quit a challenge but the public library was finally able to locate it and have it transferred to Toronto from the University of New Brunswick. Although this is considered a kids book Montgomery writes in a style that is often brutally honest recognizing that kids really do understand more than they are given credit for. I recall finding some of the realism shocking when I first read it and now as an adult I can see that the story is not all fiction and could be somewhat based on the actual historical accounts of the persecution of the species, and extermination campaigns, by government and the first settlers.

This is the paperback copy that I read as a kid, the cover image changed over the years to this stereotypical and fierce image of a cougar. It seems to be the standard cover for printings in the 70’s and onward.

As a kid I was unaware of trophy hunting, but this book made a huge and lasting impact on me in that regard as I instinctively knew it was wrong. The story of Yellow Eyes deeply saddened me, I remember crying at some parts, but I also found myself cheering for him as I turned the pages. Early on the book says that his kind was considered nothing more than “varmints to be slaughtered”, but I could not understand the hatred and cruelty directed towards these animals by humans who enjoyed causing so much suffering

The about the author page in the book says that as a child Rutherford Montgomery had listened to stories told by hunters, but that he was a “watcher, not a hunter” so it is very likely the stories he heard growing up influenced this book from the human perspective.  Montgomery takes the reader on step further and into the mind of Yellow eyes so we also get to see what happens from his perspective. The book does anthropomorphize parts but this functions as a way to create a sympathetic connection between reader, Yellow Eyes and the harsh world he lives in. 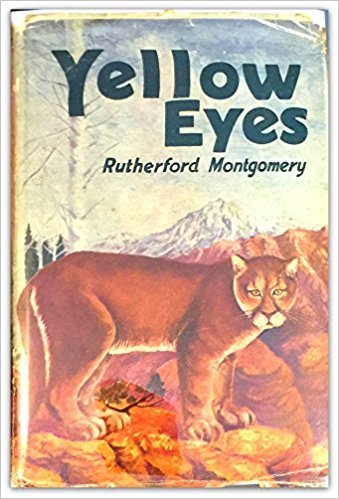 There are many themes in the book that can be considered relevant today. Besides the condoned extermination campaigns there is the acknowledgment that man had “waged a ruthless ware” against predators like cougars, coyotes and the wolf. We see Yellow Eyes through hunter Cougar George his sworn enemy and, we are introduced to a more sympathetic character who understood the animals and role they played in nature, a Native American man named Treon who wants to help Yellow Eyes survive. Yellow Eyes learns that not all humans are like the hunter and the two develop a mutual respect for one another.

Through Yellow Eyes we see the struggle of his kind and we also see his joy at finding a mate, the sorrow of losing her and their kittens. The harshness of life teaches him to be strong and smart which earns him the reputation of a cunning and fierce animal. Are his experiences and instinct enough to help him survive in a world that humans are rapidly encroaching on? For that answer and more, you will have to read the book.

Although out of print Yellow Eyes should be available from your local library or online from rare and used book dealers. One of my childhood favorites for many reasons it also makes my Recommended Reading List.