Oil, the one thing that allows us to live very convenient and comfortable lives. It is responsible for creating wonderful things but it also has the ability to destroy. Time and again we have seen the damage that can happen when things go wrong such as the devastating consequences of oil spills, but besides that is there another impact the industry has on wildlife? To be honest it wasn’t something that I really thought about until I came across a series of articles in the Boulder Weekly that takes a fascinating and in-depth look at the relationship and potential motives for the killings of mountain lions and bears in Colorado.

Colorado Parks and Wildlife (CPW) approved two controversial and highly contested management plans that look at the impact mountain lions and black bears have on mule deer populations. The plan, which was implemented as of this spring, essentially calls for the killing of these predators in the Piceance Basin and Upper Arkansas River areas. It received support from ranchers, hunters, farmers and the USDA, but met with opposition from scientists, conservationists and private citizens. Lawsuits filed by the conservation group WildEarth Guardians and the Center for Biological Diversity argued that land development including residential growth as well as the oil and gas industry has had a much greater impact on deer populations than predators and that a full environmental study should be completed before any killing begins.

Are mountain lions and bears the latest victims of the oil and gas industry in Colorado? – Image credit – Boulder Weekly

Joel Berger, a wildlife conservation biologist at Colorado State University told the Boulder Weekly that Instead of looking at predation, the agency should be directing its research to other more relevant questions, “such as whether the mule deer populations in question are being limited by habitat quality and food limitation.”

Through this management plan CPW hopes to provide a clear picture of the “effects on mule deer population demographics relative to changes in mountain lion density, as well as to determine their ability to manipulate mountain lion populations through sport-hunting or harvest.” The stress, cruelty and suffering that mountain lions will be subjected to is not lost on those who oppose the plan which includes the use of “cage traps, culvert traps, foot snares and trailing hounds for capture”. As of May 1 efforts have already begun to trap and remove or relocate mountain lions and bears from the Piceance Basin predator control area. Gail Keirn, public affairs official with the United States Department of Agriculture Wildlife Services said that snares were being used to trap live animals and that “CPW would determine what species was snared, if it is female with young or an adult.” Family groups would be relocated, but adult target animals will be killed with a firearm.

USDA’s Wildlife Services will be contracted $50,000 annually to assist in the killing of mountain lions and bears in the Piceance Basin area, rather than hunters, but CPW is unsure if they will use them in the Upper Arkansas River area. Overall the plan aims to kill between “15 and 45 mountain lions and 30 to 75 bears over three years in 500 square miles west of Meeker and Rifle, Colorado, as well as more than half of the mountain lions in 2,370 square miles in the south-central part of the state.” WildEarth Guardians staff attorney, Stuart Wilcox, told the Boulder Weekly that he thinks the predator management plans are being used to divert attention away from the actual cause limiting mule deer populations, which, he believes, is land use regulation. There is also a lack of data on mountain lion and bear numbers in the areas which means they have no population base line making it impossible to determine if these predators are indeed responsible for declining deer numbers or if mountain lions and bears are being “over-killed”. It was also said that CPW did not use part of its mule deer funding from the oil and gas sector to carry out proper population research prior to deciding to order the killing of an unknown part of the mountain lion and bear population.

The killing has bigger consequences in terms of upsetting the balance of the eco-system as well as disrupting the target animals social structure putting males, females and kittens at risk. Kittens risk being orphaned before they are old enough to survive on their own or become victims of infanticide and, when mature mountain lions are removed (killed) it is known to cause more human wildlife conflict as younger and less experienced males move in. 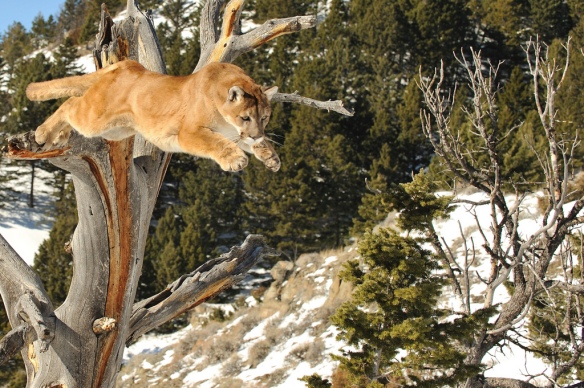 There is plenty of oil and gas development in the area where CPW’s predator management plan is taking place and, mule deer naturally range among the equipment which includes drilling rigs and pipelines. While the oil and gas companies have plans to alleviate pressures on wildlife CPW does not have a proper way to determine whether or not these plans will be successful. CPW’s own research showed that oil and gas development is limiting mule deer populations, but despite this arrangements have been made “between the agency and oil and gas companies to conduct the predator-killing efforts on oil and gas company owned land.” Not only did they find the association between a decrease in deer and oil and gas development, but CPW concluded that during an oil and gas boom there were incidents of increased poaching. This is said to be another cause of decreasing deer populations and an additional factor that needs to be fully understand before putting the blame on predators.

The Boulder Weekly points out that CPW did not consider oil and gas impacts on the deer because “sportsmen” didn’t think it was necessary to include it, which is confounding except when it is pointed out that a portion of their research funding comes from hunters or an “excise tax on the sale of firearms and ammunition products.” Hunting quota’s must be increased in order to get more funding – more deer, more money.

The plan to remove predators and methods are disturbing and unscientific especially since there is no accurate population data for mountain lions and, with another gas boom on the horizon in the area it is predicted that deer populations will once again fall as more habitat is destroyed by the industry and poaching increases. This means that mountain lions and bears will become convenient and expendable scapegoats.

“CPW is required to balance oil and gas extraction with wildlife and its habitats; a balancing act that is proving impossible.” Boulder Weekly

While it is acknowledged that the connection to the oil and gas industry, via funding, is evident it does not necessarily mean that CPW is “exhibiting funding bias on behalf of the oil and gas industry.” However, the Boulder Weekly goes on to say that with regards to the plan to kill mountain lions and bears where previous non-oil and gas funded research concluded “oil and gas extraction and suburban development, not predators” were the main reason for declining deer numbers, does make the plan look highly questionable.

The lawsuits are still pending and in the meantime mountain lions and bears continue to be targeted for declining deer numbers. As our dependency on oil and gas seems here to stay, at least for the foreseeable future, we will need to give some serious thought on how companies, cities, countries and governments will address the impacts of the industry on both our wildlife and environment.

Excerpts have been taken from the ongoing Boulder Weekly series Off Target which can be read in full by following the links.

5 thoughts on “Cost of Doing Business: Oil and Mountain Lions”