Canada is a country blessed with vast, beautiful and diverse landscapes. For the most part its wilderness has remained intact, but as it starts to vanish so does the wildlife, often disappearing quietly and unseen. Thankfully there are those who, through photography, are on a mission to ensure these special places and their animal inhabitants continue to be seen and heard.

Based in Western Canada wildlife enthusiast vivs_insties is one such photographer generously sharing her special world and version of the wild west, with the rest of the us. Viv has also been kind enough to take the time to answer questions about her hobby turned passion and, provide images of the creatures that reside right in her own backyard.

How did you get started photographing wildlife?

I have been taking wildlife photos for many years, but it has only been in the last 3 years that I have invested in a good zoom lens. I received my first trail camera as a gift from my husband in 2005 and that first trail camera quickly started us on a very addictive hobby. Right now we now have 40+ cameras on our 160 acres of land.

Why did you decide to start sharing your photos on Instagram?

Have you always had a passion for wildlife and nature?

I have for many years now. I was born in Banff, AB and although my parents did not hike or ski, we camped a fair bit and had many picnics and drives in the mountains while my father fished. It wasn’t until I met my future husband that I was introduced to both hiking and cross country skiing in those same mountains. He also enjoyed photography at the time, which encouraged me to get in on the fun as well. Having owned our piece of land, that I lovingly refer to as our “cabin in the woods” since 1989, my passion for wildlife and nature has grown.

The wild critters are very good at avoiding us and that’s how it should be. They are not hiding in the woods stalking us, they are going about their business of being wild and trying to thrive as best they can.

This image is of a female cougar that we knew well as a regular on our trail cameras starting in 2013. She was easily identifiable because her tail was a bit shorter and lacked a typical black tip. Her first set of kittens, that we knew of, showed up in the fall of 2016. In the “famous” photo, one of her kittens from her second set is just behind her, hidden by the trees.

We discovered a kill site in the woods quite close to our cabin, which looked very much like a cougar kill to us, but it had appeared to be abandoned before it was totally consumed. We put a couple of trail cameras on the site to see what would come back and at first we caught a number of stray dogs who spent time feeding at the site. It wasn’t until the second week, when there was nothing left at the site except deer hair, that momma cougar and her two cubs visited the site.

We had one camera placed very low to the ground and as momma cougar rounded the bend towards the site, the picture that was snapped made her look extremely muscular. I posted a sequence of that photo along with a couple others to both Twitter and Instagram.

Within a few days the photo appeared on Reddit with the trail camera bar cropped out and some sensationalized description of a monster cougar stalking someone. Next the image was eventually posted by Joe Rogan or discussed in his podcast after which it started showing up all over social media, from Instagram to Facebook to on-line discussion forums, with made up stories to go with the photo falsely claiming that the picture was taken by whoever happened to post it.

Friends and my Instagram followers keep notifying me that my photo was popping up in various places so I attempted to let these people know they were using the photo without authorization, but by then it was so widely shared that I could not rein it in. The thing I learned from that was to start watermarking my photos before posting them to social media!

What animal do you most look forward to seeing on camera?

It is always hard for me to pick favorites! I like seeing predators like cougars, lynx and wolves, but I also love seeing baby animals, especially baby bears! I also enjoy photos of the more uncommon animals like the family of Sandhill cranes that showed up on camera this spring, or the odd bobcat. I just like seeing photos of all the wild critters! 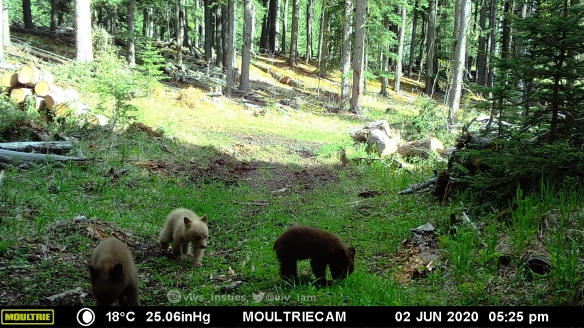 Do you have a favorite image?

I could never pick just one favorite!

Tell me about some of the wild cats you have photographed

The trail cameras have taught me that when a cougar is in the area with a kill there are often other cougars around, and sometimes with young. My assumption is they would be sharing the kill which surprised me, but that is what the cameras have shown us.

I noticed that if a cougar is around lynx are often not far behind, on the same day or within a day of the cougar!  Another thing that surprised me was that I don’t think I’ve ever had a trail camera photo, cougar or lynx, where the cat was frightened by the camera! I have plenty of captures of coyotes, wolves and fox being scared of the camera and even running away in night photos, but I don’t think we have ever had a cat appear surprised or afraid of the camera.

What are some of the challenges facing wildlife where you live?

We are located in an area that is surrounded by a lot of acres of wooded foothills and farther west is mountains, so it’s a sparsely populated area and not easily accessible. From that standpoint the wildlife is pretty secluded, but we do seem to have a problem with stray dogs. The dogs are likely not spayed or neutered, as we have had pups on the cameras numerous times, and they pack up and chase mostly deer but also moose when they come across them.

This is a challenge for both the wildlife and for us! We actually came across  a treed cougar one fall day on our property after a few stray dogs chased it up there, the trail cameras told the whole story. Since these dogs are not afraid of humans, like the wild critters are, I am much more afraid of running into them while out wandering. We carry bear spray year round for this reason. 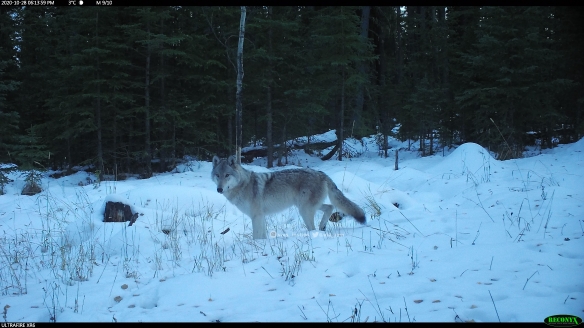 In addition we had another large area to the west of us clear cut 4 years ago. We saw a spike in predator activity on our trail cameras when active logging was happening and I believe those predators were disturbed and moved into quieter areas. As that logged area regrows, more ungulates have moved in to eat the new growth and eventually this will bring in more predators. So while I believe logging is hard on wildlife for the few years during and right after it is complete, I do think it eventually leads to better food sources and a healthier populations of both predator and prey.

What message do you hope your images convey to people about Canadian wildlife?

I want people to know that we share this space with many unseen critters. It is our responsibility to keep our own impact on wildlife to a minimum. I think it is really cool that a mere 60 kilometers from a big city the size and population of Calgary, there are forests full of wildlife.

One of the things I really like about the trail cameras is what they have taught me about animal behavior. Walking on our property we often came across critter tracks, but we really did not see much wildlife other than deer, moose and elk. The trail cameras were able to tell us a completely different story – one that says we share the woods with an incredible variety of wildlife.

The wild critters are very good at avoiding us and that’s how it should be. They are not hiding in the woods stalking us, they are going about their business of being wild and trying to thrive as best they can. We are very aware of not disturbing their home, not leaving any sorts of attractants out and not upsetting the delicate balance of nature.