The jaguar is the largest and most powerful feline in the Western Hemisphere. They have solid, compact muscular bodies with the males weighing in at 150 to 200 plus lbs reaching lengths of seven feet – without the tail. They have extremely powerful jaws and massive heads making them a top-level predator and carnivore that keeps prey animals in check thus helping to prevent overgrazing of habitat. They are often confused with leopards but their coat pattern is very distinct made up of a yellow or orange-colored coat with markings called rosettes. 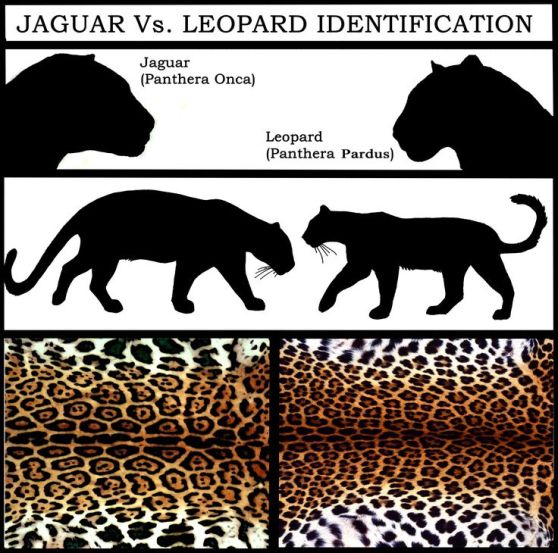 Jaguars once roamed from Argentina in South America all the way up to Texas, Arizona and California but were systematically wiped out throughout most of their natural range in the U.S. in the early 1900’s. With the exception of the few who make it across the border into Arizona, like the famous El Jefe who appeared on camera traps in the Santa Rita Mountains in Tucson, they are considered expatriated in the U.S. Jaguars are not fairing much better south of the U.S. border, Sonora in Mexico is thought to hold a breeding population currently, where they suffer from habitat loss and fragmentation, persecution from ranchers, poaching and hunting. Their numbers are estimated to be at 15,000 but it is unclear how many are left as they are highly secretive and elusive, perfectly camouflaged for the forested and woody areas in which they mostly reside.

Jaguars are loners, coming together only to mate, hunting and preferring to feed alone. They can take prey the size of small birds and frogs up to deer, alligators and domestic livestock. They are a formidable predator which knows no real threat from its prey while hunting except perhaps from the giant anteater. If you are wondering what would happen should a jaguar and giant anteater meet wonder no more. Footage taken via camera trap in the Brazil’s Gurupi Biological Reserve, as a part of a survey on jaguars, has revealed an encounter only talked about in stories, one that had never before been witnessed by humans. A giant anteater can weigh anywhere from 40 to 140 lbs, with an adult being about the size of a small female jaguar, and is a worthy and even deadly opponent when you consider their claws, which are twice as long as the infamous velociraptor. Anteaters are not aggressive to humans or other animals, but they will defend themselves if startled or feeling threatened, in fact they are responsible for the deaths two hunters in Brazil.

Image – Giant anteater claws, which are very elongated in the second and third digits. Photo by Vidal Haddad, Jr. via ResearchGate

Researcher Elildo Carvalho Jr., of the Brazilian National Research Centre for Carnivore Conservation (CENAP) was the first to discover the never before seen footage while reviewing thousands of camera trap videos. Unfortunately the outcome is unknown as the camera was retrieved a month after the encounter and the video reviewed much later on.

In the southern Pantanal in Brazil anteaters make a small portion of a jaguars prey about  3 percent, but in the Cerrado, in central Brazil anteaters make up about 75 percent of the cats diet. Encounters can be very dangerous and Carvalho says it’s safe to assume that a jaguar would only attack by surprise or from behind and, that what happened in this video is the result of a surprise run in between the two species. He thinks that the two likely took a look at one another and then decided it wasn’t worth it and moved on, but there is no way to know for sure.

Despite there not being any evidence regarding the outcome of this particular video there is one photo, taken in the Cerrado, showing a jaguar carrying a large full-grown anteater. 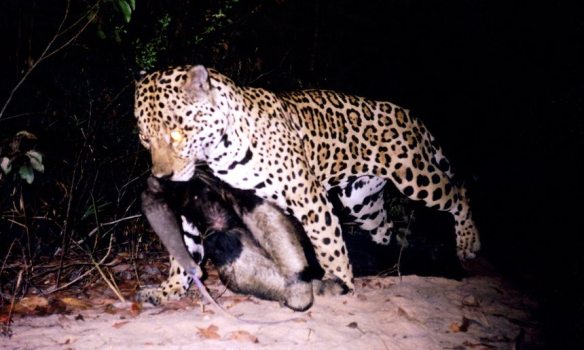 Image – Jaguar caught on camera trap with adult giant anteater in the Cerrado. Photograph: Edsel Moraes Jr. via The Guardian

Camera traps are allowing researchers a rare glimpses into the world of the secretive jaguar and how it shares, and is interconnected, to other species like the giant anteater. Jaguars although facing decline from dramatic habitat destruction and fragmentation, in the Amazon, the Cerrado and the Pantanal due to deforestation from cattle ranches and agriculture, are only considered Near Threatened. With loss of habitat comes loss of the jaguars natural prey which in turn can bring them into conflict with cattle leading to retaliatory killings from ranchers. Although commercial hunting and trapping has been reduced over the years, thanks to CITES controls and an Appendix 1 listing, they are still poached for their skins and teeth.

The wow moment like the one caught of the jaguar and giant anteater is thanks to the use of camera traps which are important tools in helping researchers understand jaguars in ways which they could never imagine. It doesn’t hurt that the general public benefits by getting a glimpse into an encounter that we would never otherwise have the opportunity to see.

A collection of camera trap videos from the CENAP survey in Gurupi Biological Reserve shows many other species, including rare species like bushdogs, pumas  and giant armadillos.