There is a very good chance that at some point, almost every person either as a child or adult has visited a zoo and, held the belief that zoos were a good thing, acceptable ways in which to educate people about wild animals that they could never hope to see outside of the confines of a man-made world created to house them. We have learned that zoos help ensure the survival of certain species in captive populations that are both genetically diverse and stable, and a captive animal is better than an extinct animal. 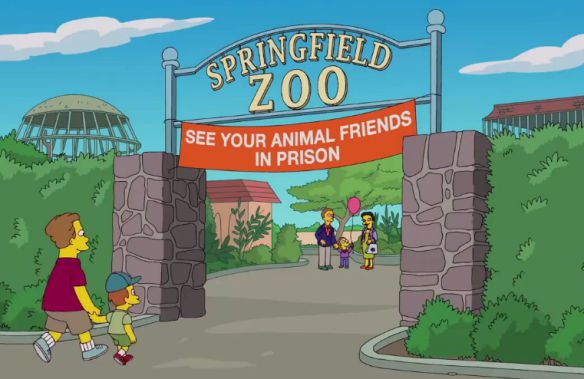 Over the years opinions on zoos have greatly changed, as has the belief that forever in captivity is acceptable while we allow species to go extinct in the wild. While natural extinction events have occurred throughout the earth’s history we are currently in the 6th mass extinction, and this time around the cause is directly related to humans. If the current rate of extinction continues and we cannot save habitat or preserve wildlife in their natural environment, is it beneficial to continually breed species into a life of captivity?

A male lion at a Japanese zoo was filmed trying to pounce on a little boy with his back turned, and in this video the lion can be seen crashing into the protective glass wall. Similar videos have been shared and deemed “cute” or “funny” when in fact it is not as lions like most big cats, see small kids similar to prey. This lion is acting on instinct but meets with frustration when he cannot fulfill his natural tendencies. It is now excepted that keeping predators like lions in zoos is not only cruel but potentially dangerous.

Are zoos really doing something positive or are they having the opposite effect on people, and can zoos ultimately survive as people change their views of them? The Toronto Zoo, which has been in operation since 1974, has seen a drop in visitors as well as revenue in recent years. Typically that’s when they make changes, bring in new animals or start new programs to attract visitors. Bringing in new animals or making changes costs millions, which the zoos will hopefully make back, but do any of these initiatives truly help conservation?

Among the many other moral and ethical issues surrounding zoos, one stands out in particular – that is the dirty secret of Surplus animals. It is the hidden world of what happens to animals when they are considered ‘non-essential’ either from a genetic or profit standpoint. These surplus animals are euthanized, traded to other zoos or worse, sold to private individuals, game reserves, canned hunting facilities, circuses and even roadside zoos. The lucky ones may end up at a proper sanctuary, where they are cared for for life, but many do not.

Zoochosis is another well documented problem whereby animals are impacted psychologically by being in captivity. This stereotypic behavior includes repetitive swaying, pacing and licking or biting of walls and bars. It is all abnormal behavior and clearly demonstrates that animals in zoos suffer. Even the best zoos cannot ever hope to fully duplicate what animals would experience in the wild, all they can do is try to prevent this behavior by providing proper enrichment.

If this isn’t enough to sway your opinion on zoos, then the two very recent and disturbing events of the past few months should. The first one was the killing of two lions in a Chilean zoo after a man jumped into their enclosure in an attempt to commit suicide, then not long after Harambe the Gorilla at the Cincinnati Zoo was shot and killed after a young boy got into his enclosure. Animals subjected to a life in captivity by humans, then killed because of human error and oversight. Sadly these were not the first cases of animals to be killed at zoos due to breaches, and they will likely not be the last.

Then there is the purposeful killing of animals like Marius the giraffe at the Copenhagen Zoo, and a 9 month old lioness at Denmark’s Odense Zoo who were both publicly dissected for ‘educational purposes’. This is also the zoos way of doing population control on surplus animals. It’s important to remember that lions are a species on the verge of collapse in the wild so the idea that any zoo would be breeding and killing healthy animals is simply preposterous. 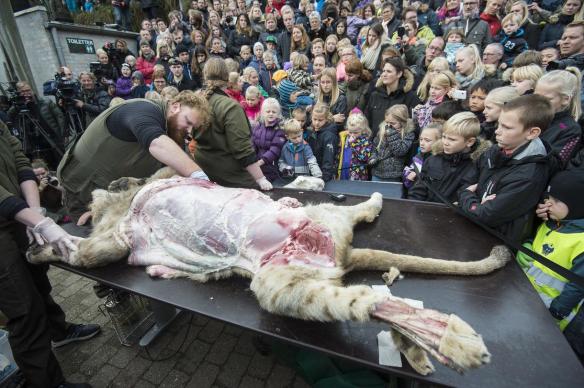 The case against zoos is growing and more main stream media outlets are picking up on it, the tone mirrors the way many people now view zoos – that there days may be numbered and we need to start looking at alternatives. In an article written about Orca’s in captivity, David Hancocks, ex-director of Woodland Parks Zoo in Seattle tells BBC News that he imagines “zoos of the future with fewer big charismatic animals, giving attention to small species that do well in captivity, in environments that are stimulating for them, and even with very small life form exhibits that showcase the interdependence and interconnectedness of the natural world”. He also says that it as it becomes more clear that most of the standard big star attraction animals in zoos shouldn’t be in captivity and he expects the public to “react in similar ways to the way they have reacted to the revelations about what was happening in SeaWorld.”

We also need to ask ourselves if we are really learning that much from zoos? My personal experience says not much, a few zoo visits didn’t teach me anything that I wasn’t able to learn on my own via other sources like reading or watching TV programs. Once I finally fulfilled a life long dream of seeing my first lion in the wild I knew that I could never look at a captive zoo lion again and feel right about it and, I believe deep inside most of us know it is wrong. In his book, Raising Kids Who Love Animals, child psychiatrist Sujatha Ramakrishna wondered whether a trip to the zoo is an educational experience, or if it only encourages them to treat animals with disrespect. He came to the conclusion that even the good zoos were bad after visiting different ones and noting behavior of the animals and people viewing them.

“Though I hoped to find evidence to the contrary, I must conclude that zoos continue to be detrimental to animal welfare, and that they do not teach children positive lessons about animals. Kids who watch leopards pacing in mindless patterns get a completely inaccurate picture of what large predators are all about. They also learn that making sentient beings suffer for human amusement is acceptable. We want to teach kids to show kindness towards animals, not stare at their misery while eating popcorn.” – via Global Animal

Ideally in a perfect world all types of zoos would be abolished and only sanctuaries of the highest standard would exist, places where animals can live out their natural lives with the best care and environments possible. Sanctuaries will unfortunately be a necessity as there will always be wildlife to rescue and rehabilitate, but unlike zoos, they do it without breeding or exploiting animals. Reputable sanctuaries work to ensure the animals mental and physical well-being are a priority and can also play a role in educating the public.

Zoos have been around for a long time and date as far back as ancient Greece, their history is bloody and disturbing and while in some places they can be considered to have come a long way, in many countries the horrors continue to this day. Surely the case for abolishing zoos where they are literally death camps for animals should be a priority, and working to phase them out everywhere a future goal.

In the meantime what does the future hold for zoos? This is where technology can help with something called a virtual zoo. This would bring the experience of being at a zoo without the captivity and suffering that comes with it. Landmark Interactive Virtual Experience (L.I.V.E), a company behind entertainment experiences such as Universal’s ‘Jurassic Park: The Ride,’ and ‘The Amazing Adventures of Spiderman 5D’,  is planning on creating a virtual zoo and aquarium in China. This will be the first of its kind and is set to open in 2017 or 2018. 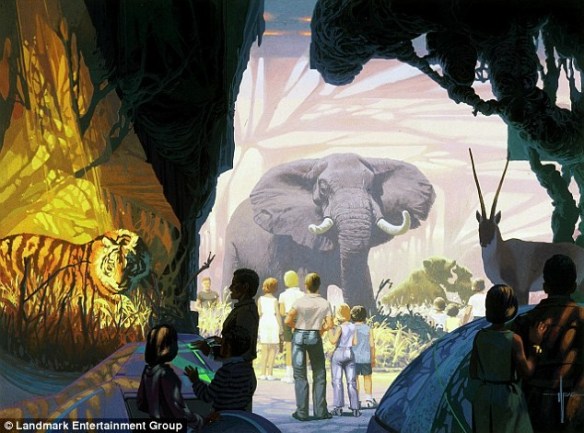 L.I.V.E  image of a virtual zoo

Landmark Entertainment Group CEO Tony Christopher told Fortune magazine that they will have the ability to “put you in the African savannah or fly you into outer space.” Besides entertainment it also has the ability to educate without causing harm, and although it can never be a substitute for conserving animals in the wild the technology could be a big step in helping reduce the number of animals kept in zoos. While widespread use of technology like this may be a long way out, it is still good to know that one day people of all ages will be able to have the ‘zoo’ experience without the negative aspects associated with traditional zoos.

Even with technology, nothing beats the real thing and conservation of wildlife and habitat should remain a key priority going forward, perhaps the virtual zoo of the future will one day help financially benefit conservation directly. Until that time when we have finally moved away from the traditional model and no longer have wildlife in captivity, we are left faced with the zoo dilemma that can be either solved or perpetuated by the choices we make.

If you are looking for activities to do with or without kids that doesn’t involve a trip to the zoo, here is a list of six ideas that will give you all the benefits and help animals at the  same time!

Update: on June 15, since posting this piece a lion named Zawadi was injured at the Oregon Zoo while children watched. Footage shows the lion entering the training area through a hydraulic door, which then shuts chopping off the tip of his tail. The show only came to a stop because the audience started yelling.

5 thoughts on “The Zoo Dilemma”