The ground breaking film Blood Lions airs on MSNBC tonight in the USA. This film will not be easy to watch I will tell you that right off the top. It is however one that needs to be watched if the world is to stand up to the legal, horrific and brutal practice of Canned Hunting. Please watch and share the link with others.

Catch the premiere of Blood Lions, tonight October 7 at 10pm ET on MSNBC.

For other dates check the MSNBC Documentary Schedule 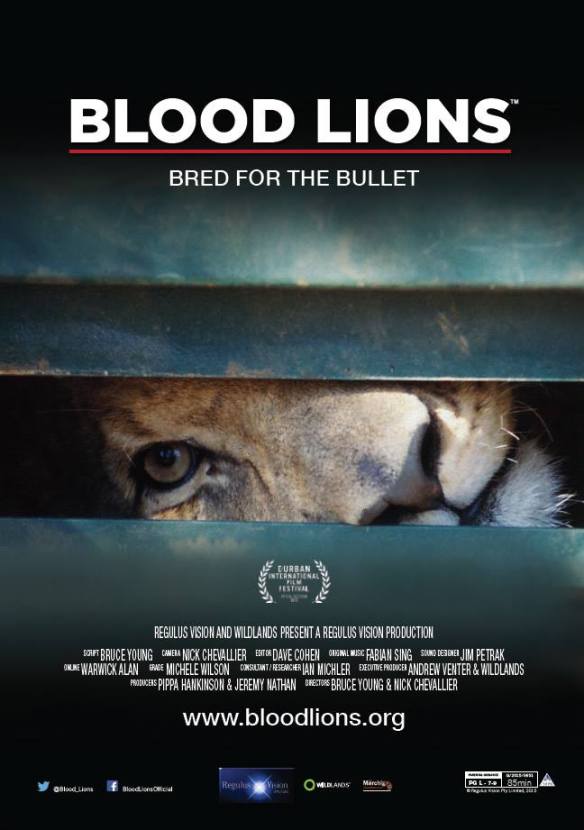 Blood Lions will take viewers into the dark world of the canned hunting in South Africa. Image – Blood Lions on Facebook

With the help of Ian Michler, safari operator and environmental journalist and Rick Swazey, an American hunter, viewers will see inside the breeding farms where lions are bred to be killed. The chain of suffering starts with tourists who volunteer or pay to pet, play, and bottle feed Lion cubs. Once these cute cubs are too large for human interaction the tame and habituated Lions are sold to canned hunting facilities where hunters pay big money for an easy and guaranteed kill. The Lions are shot with guns, rifles and crossbows all in an enclosed area with no chance for escape, suffering greatly before they die.

“Our film is an exposé,” says Blood Lions director Bruce Young, “most of the lions exist in appalling conditions, exploited at every stage of their lives. Even the people in South Africa do not know that lions are being bred for the bullet – and that it is totally legal. We want to show the world what is going on, who is involved, the impact on the animals and how much money is being generated by this industry.” – MSNBC

Volunteering in South Africa’s lion breeding facilities learn what you are really supporting.

Lion Bone Trade The demand for lions bones in China has created a new market for lion breeders in South Africa.

Want to help? Sign and share this petition to ask REAL GAP to Stop Sending Volunteers to Lion Breeding Projects in South Africa.