I am big believer in petitions and sign more than I can count, and while I understand that not every petition works, some do surpass their intended outcome. One benefit, regardless of the perceived success, is that they can be good vehicles for creating awareness. In some cases they may even be a catalyst for changing laws and the way business is done. For the few minutes or seconds it takes you to sign and share a petition, change can already be underway. 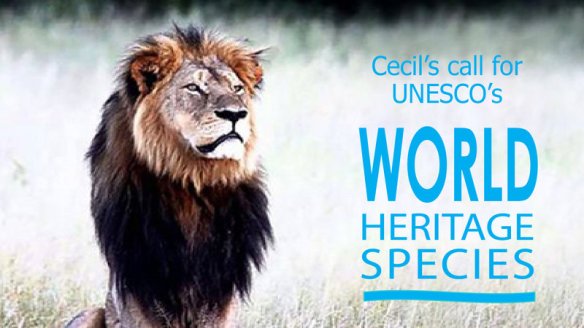 The first of its kind, this particular petition is asking to establish a “World Heritage Species” program. This would be similar to the UNESCO World Heritage Sites initiative, but would extend to recognize and protect wildlife. The petition also asks that the first species listed in this program is the Lion.

The Change.org petition is circulating around the world, should you wish to sign and share it can be found here.

Brent Stapelkamp, field researcher with Oxford University’s WILDCRU, who had been following Cecil the Lion for nine years speaks about this very petition.

It is interesting to note that Brent in a previous BBC interview said that while he is against hunting, more about that in my piece In The Wind, he doesn’t want it banned. Is he having a change of heart? Maybe I’d like to believe that we can find alternatives to protecting wildlife that doesn’t involve killing, while helping to stop poaching and the other factors driving species to extinction.

Will raising the status of the Lion and addressing the crisis we are facing it in this manner helps us save the species? I don’t think it hurts the cause to try. Ideally I would also like to see this type of recognition be extended to include all of the big cats (wildlife) who are also threatened or close to extinction.