Cassidy the kitten had a very rough start. Born to a feral mom, he spent his first weeks fighting for his life and by the time he was found he was starving to death and missing his back legs.

TinyKittens, a volunteer-run non-profit society working to improve the lives of cats and kittens in need in Fort Langley, British Columbia rescued Cassidy after he was spotted on a rural property. By the time he was rescued he had already lived 9 weeks with his injuries. 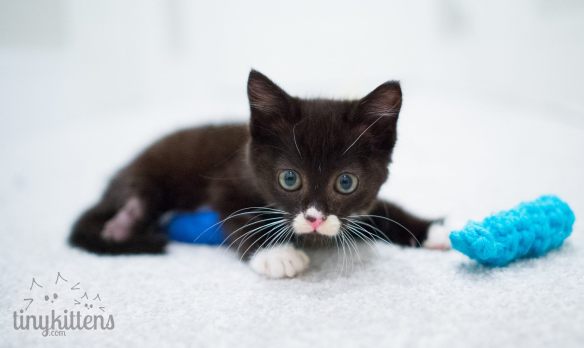 Shelly Roche of Tiny Kittens, who trapped Cassidy, tells the Langley Advance that she “could feel all his little bones” and that he had survived not being able to walk on his back legs likely from birth. His mother could have accidentally bit off his feet, if they were tangled in the umbilical cord. Besides his injures he was also suffering for an a septic E. coli infection and the first vet who examined him wasn’t sure if he would survive. 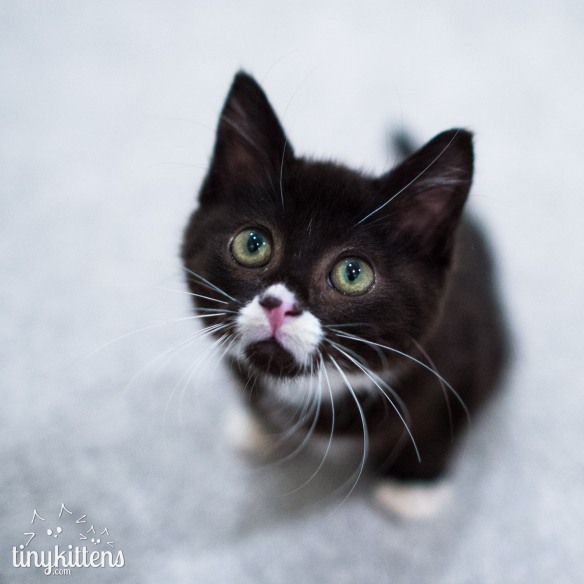 Cassidy however had a very strong will to live and after he was brought to Mountain View Veterinary Hospital where his wounded legs were cleaned up, Tiny Kittens put him on their live internet feed. They wanted to give Cassidy the best chance possible to have a good quality of life and leveraged their large online following asking for help with obtaining a pet prosthetic.

Lucky for Cassidy the good folks at Handicapped Pets Canada approached Tiny Kittens and offered to provide a custom-built tiny wheelchair to allow him to run around using his front legs.

Roche  says that they are “even looking into implanted prosthetic feet” like the ones Oscar the bionic cat got when he lost his front legs in a combine harvester and became the first feline recipient of special prosthetic implants. Two students have also stepped up and suggested using their school’s 3D printer to make progressively larger wheelchairs as Cassidy grows. 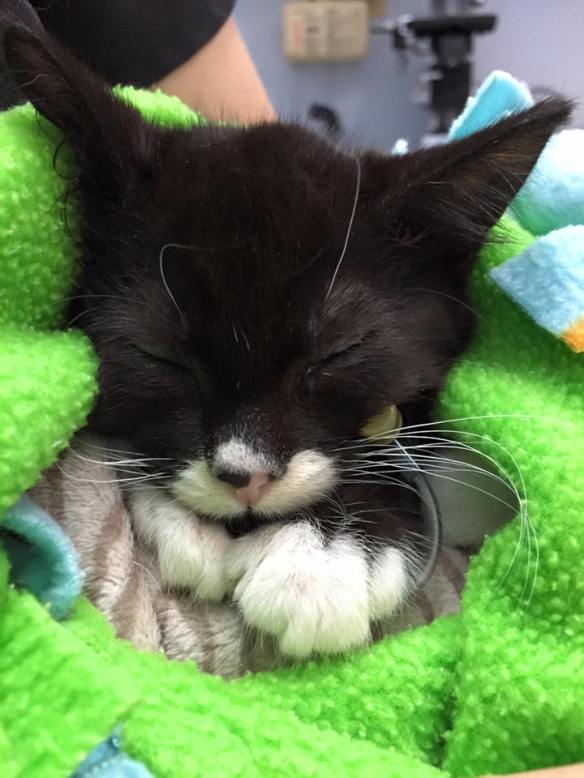 Cassidy recovering after his neuter surgery.

In the meantime they are ensuring Cassidy is happy and on the road to living a full life. He is off his pain medication and is being a typical kitten playing with his brother Topper and other cats. Roche says he is at about “40 percent” when it comes to using an accessible litter box made for him.

Once Cassidy is ready, he will need a forever home where someone is willing to provide him with lots of love and care.

You can watch Cassidy live on the TinyKittens web cam here and follow him on Facebook for updates and more videos.