There is something special about wildlife photography and for many reasons it has always been my favorite genre of photography. Capturing the essence of wildlife on film is both magical and powerful, the images can help convey a message as well as connect people to wildlife by inspiring awe, action, and even empathy. It’s these elements that help make wildlife photography and in particular conservation photography an important tool for teaching people about wildlife conservation. In a world where many species are now rare, endangered, or in many cases headed for extinction, each photograph taken has become a portrait or permanent record, in essence a type of living digital fossil that tells a story while there is still time to save the species.

Joel Sartore Wildlife photographer, National Geographic Photographer and National Geographic Photo Ark founder has taken the task of documenting the worlds most rare and or endangered species to the ultimate level by creating thousands of portraits of animals that reside in human care in zoos and sanctuaries around the world. This multi-year project hopes to continue to document, raise awareness and find solutions to some of the most pressing issues affecting wildlife and their habitats. Photo Ark aims to do this by inspiring “action through education” and by helping to save wildlife by “supporting on-the-ground conservation efforts”. Joel’s work with the Photo Ark began over a decade ago and to date he has photographed over 7,000 species. Once the Photo Ark is complete he will have created portraits of an estimated 12,000 species, but importantly the project will serve as a  “record of each animal’s existence and a powerful testament to the importance of saving them.”

The photos are instantly recognizable as each animal from the smallest to the largest and most charismatic are represented equally with nothing more than a simple black or white backdrop. With no distractions the viewer must focus on the intended subject as well as the message that lies behind the eyes staring back. 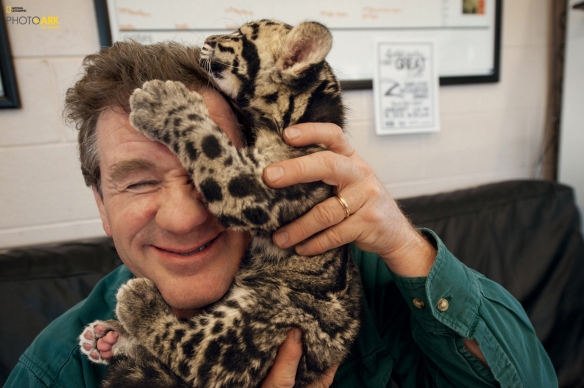 © Photo by GRAHM S. JONES, COLUMBUS ZOO AND AQUARIUM
‘After a photo shoot at the Columbus Zoo in Ohio, a clouded leopard cub climbs on Sartore’s head. The leopards, which live in Asian tropical forests, are illegally hunted for their spotted pelts.’  Image © Joel Sartore/National Geographic Photo Ark natgeophotoark.org

Being a fan of Joel’s work, one of my personal favorites is the portrait of Uno an endangered Florida Panther who was blinded by a gunshot wound, I was excited to have the chance to hear him speak recently at the Royal Ontario Museum as the Wildlife Photographer of the Year Keynote. Joel has a reputation for being a phenomenal speaker and he did not disappoint, he was engaging, entertaining, passionate and extremely inspirational.

His talk included stories full of humor and hope while others were more serious, the conservation stories of species that we still may have time to save and others that it is already too late for. Some of his portraits would be the last the world would see of these animals and that, a profound message, should resonate deeply on an emotional and spiritual level with anyone concerned for the state of biodiversity on our planet. 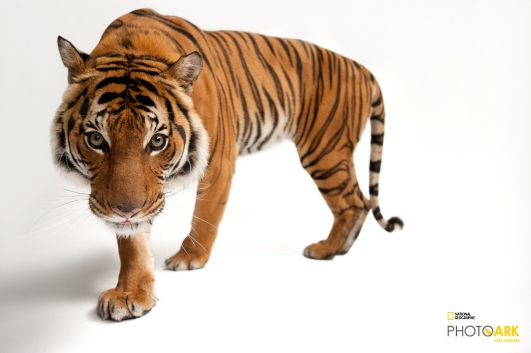 His photography for The National Geographic Photo Ark involves captive animals so there is a strong affiliation with zoos and, as the topic of zoos has become extremely controversial I did appreciate Joel acknowledging this in his talk, however I personally did not agree with the statement that zoos are necessarily better at providing for wildlife than proper wildlife sanctuaries. This is one point I really wished he had somewhat expanded on considering that there has been such a strong backlash against zoos with stories of healthy animals being killed or evidence that many have inadequate and inhumane conditions in which their animals are kept. Perhaps zoos in some cases provide a purpose in conservation of some species for future re-introductions, but ultimately preserving habitat and ways of keeping species alive in that habitat currently should be an equally important message or at least included in the discussion.

I was however pleasantly surprised to hear Joel comment on the impact of livestock when talking about some of the biggest threats to wildlife conservation, perhaps one the least talked about issues, after human population. This was the slide he used to demonstrate his point, which is just as powerful as any of the animal portraits. It is a reminder that everything is connected and clearly our choices have a lot of power so talking about our eating habits on top of the other issues, must be part of the discussion as it has a direct connection to the loss of wildlife and wildlife habitat. 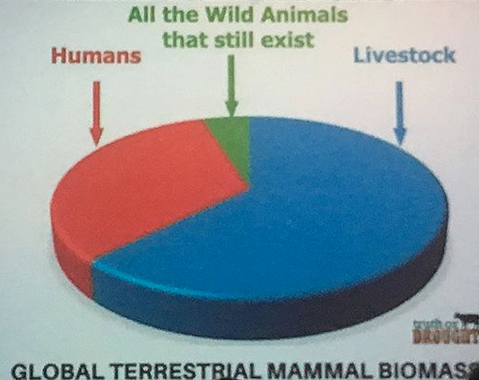 A few things I have always strongly believed in were mentioned as well, one is that he suggests people would also benefit by doing their own research on the issues. The other is that change really comes from within and he encourages everyone, adults and young people, to do something – to find something they want to do to help and do it.

The National Geographic Photo Ark is meant to inspire and to get people to think more critically which is important if humanity wishes to save wildlife, our planet and ultimately ourselves. It shows us that the beautiful art of photography can help save wildlife but it must also be accompanied by a shift in how we view our role in their survival. 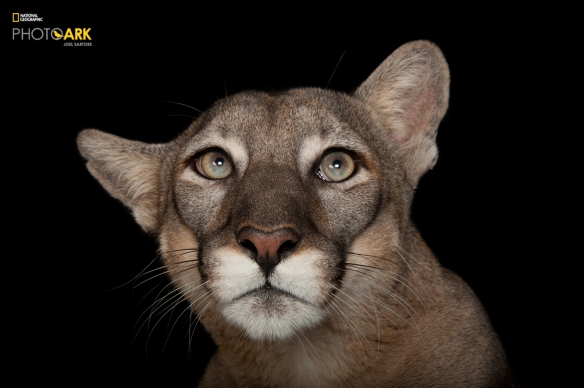 With the thousands of rare and endangered animals photographed you may wonder what Joel could possibly have to look forward to when he has already seen so much? No need to worry he has not lost his enthusiasm and remarked at the end of his talk that he is always excited about the “next animal to photograph”.

To find out more about Joel and The National Geographic Photo Ark, how to help or get involved visit NatGeoPhotoArk.org

For your caturday viewing pleasure – a miniature world of paper wildlife with an important message.

From the National Geographic Short Film Showcase: “Paper predators and prey spring to life in this visually stunning short from directors Dávid Ringeisen & László Ruska. An ordinary desk and typical office supplies are the backdrop for this micro-universe that carries the macromessage of wildlife conservation. While humans are left out of the piece, their impact is still present in a discarded cigarette butt that sparks an imaginary forest fire and an overflowing wastebasket that pollutes a fantastical rolling-chair river. This piece is part of the filmmakers’ MOME thesis project, the animation department at Moholy-Nagy University of Art and Design in Budapest, Hungary and was created for WWF Hungary.”

There was an error retrieving images from Instagram. An attempt will be remade in a few minutes.