The first Let’s Talk About Your Cat of 2017 is sure to help get your new year started off on the right paw. It features one of Purr and Roar’s followers, and fellow blogger’s, cats from San Diego, California. Thanks to Lisa for sharing the story and photo’s of her beautiful cats Dimitri and Milo!

Dimitri (left) and Milo (right) hanging out on the kitchen counter

Milo is Dimitri’s “brother from another mother”—literally! They have two different moms, born 3 months apart, but they have the same father. Milo looks just like their dad. Norwegian Forest Cats are a naturally large breed, and Dimitri is a perfect example of this at 15 pounds.

Milo (top) with his paw on Dimitri (bottom)

Milo is a little more petite and dainty at 12 pounds. My husband and I forget how big they appear to people (especially Dimitri) because we are so used to their size after living with them for 4 years. The other day at the vet the parents of a little Shih Tzu couldn’t believe the size of Dimitri…he was way bigger than their dog! We’ve also noticed that “regular” cats seem very small to us now. I don’t know if we’ll ever get used to all that fur…especially when they “molt” their winter coats in the spring! 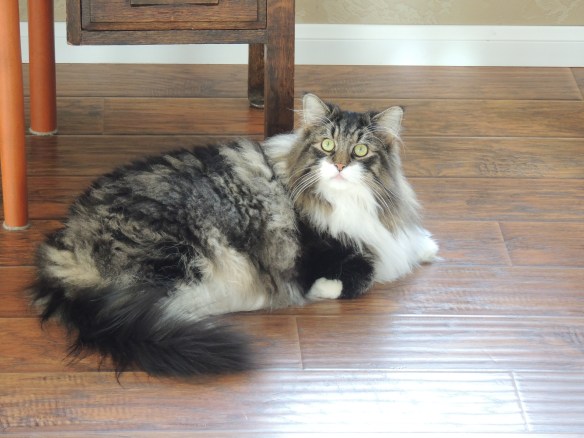 In addition to their size differences, they definitely have different personalities. Both are very sweet and gentle, but while Dimitri is more independent, Milo is very people-oriented. Dimitri is content to go off and sleep in a quiet spot for hours. He always wakes up in a happy mood and comes looking for rubs and pets. He carries his fluffy tail high like a plume when he walks around. He also likes to sleep flat on his back and curl his paws. All that fluffy white belly fur is pretty irresistible, but he’s likely to flip over and go “brrr” if you try to pet it.

While Dimitri is a cat’s cat, Milo is more like a puppy. He’s very vocal and affectionate…if you talk to him he’s likely to talk back, and if you pet him he’ll start purring. He loves getting pets while he eats his food, and jumping onto laps for a cuddle session…whether it’s a good time for us or not. He’s not shy around strangers, and many workmen who have come to the house have been totally charmed by Milo. He will follow them around, lie on their stuff, and just generally make a cat person out of everyone he meets. 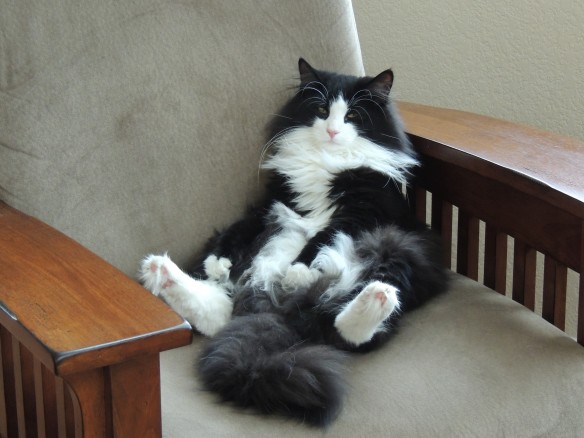 Milo relaxing in his chair

We live in a warm climate and have a sun room at the back of our house (renamed “the cat room”) where we put their cat trees and a toy basket. They love to sit in the tops of their trees and enjoy the breeze from all the windows. Our back yard is home to lots of little lizards and we’ve planted flowers that attract hummingbirds and butterflies, so they keep busy watching the wildlife all year-round. San Diego is not exactly Norway, but they seem to enjoy the Southern California lifestyle!

How did your cats come into your life?

All of my previous cats have been rescues, but Norwegian Forest Cats have been my “dream cat” ever since I first learned about them many years ago. I was fascinated by their story…an old, natural breed literally from the forests of Norway. They were always somewhat rare and in danger of vanishing due to interbreeding with domestic short hairs in their surroundings. Cat lovers in Norway began making a concerted effort to save the breed from disappearing, beginning in the 1970s. They’ve been around for centuries (they’re said to have traveled the world with the Vikings on their boats…maybe even to North America, becoming the Maine Coon) but have been an officially recognized breed for only a relatively short time. 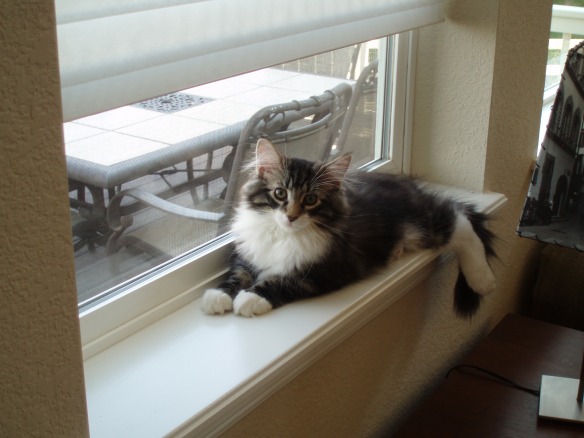 Dimitri as a kitten

It’s very hard to find a rescued Norwegian. They’re rare to begin with and many breeders ask that owners return the cats to them if they can no longer care for them. As much as I admired them, I never thought I’d ever actually have one. After my last rescue kitty passed away, I began looking into the feasibility of getting one…or as it turned out, two. Careful research led me to a highly regarded breeder who was just as discriminating as I was. We flew cross-country so she could meet us and—just as importantly—we could see her home and meet her cats. Then we got on the kitten waiting list. Then we flew cross-country again two more times to pick up each kitten in person (many reputable breeders won’t ship). Getting our boys was definitely a labor of love. It pays to do your research, be patient, and yes, spend a bit of money to work with someone you’re comfortable with and get the cats you want. You kind of have to be a little obsessed to go this route, and while it’s not for everyone, the stars really did align for us.

Milo as a kitten, with Hello Kitty

What is your first memory or experience with cats?

I can’t remember a time when I wasn’t crazy about cats. I’ve loved them ever since I could remember. When I was around 5, some of the neighborhood kids came around asking if my family would take in a little kitten. They said his mother had been hit by a car and he was by her side when they found him. I begged my parents to keep him but they said no. The kitten ended up at another house down the street and my mom and I saw him in the yard one day, looking even scruffier than before (I think he had some bubble gum and grease stuck in his fur). He looked pathetic enough for my mother to change her mind and agree to take him in. He was our only family pet and my close companion all through my childhood, adolescence, and early adulthood. I’d do my homework on my bedroom floor and he’d always sit on my books and papers…or if I was lying on my stomach, perch on my back. He passed away not long after I graduated from college, as if his death marked both an ending and a beginning.

Anything else people should know?

I proudly admit to being a cat person, and those “I like cats more than people” t-shirts were definitely made for me! Talk about stereotypes, I was even an academic librarian for many years before switching to freelance writing. Cozying up with a good book and a cat or two is my idea of heaven.  I do love all animals though, and have been known to act like an excited kid when I see a cute dog out for a walk or pass by the hamsters at the local pet store. I’ve volunteered for several animal welfare organizations over the years, some that worked with all animals and some that were specific to cats.

Cat rescue work is important but I’ve taken a bit of a break from it as I have to admit I find it emotionally draining sometimes. I used to work at a small cat shelter and found myself getting a little too upset at some of the things I saw, mostly related to what people are capable of doing to innocent animals.

A move from Colorado to California two years ago offered the opportunity for a fresh start. I heard about a local non-profit called the Foundation for Animal Care and Education (FACE) which provides financial assistance to pet owners who are unable to pay for all or part of their animal’s emergency or critical veterinary care. Urinary blockages are among the most common feline health problems that FACE helps people with. I’ve been writing the FACE Foundation blog on a volunteer basis for a couple of years now…just a small way of contributing to such a worthy cause. 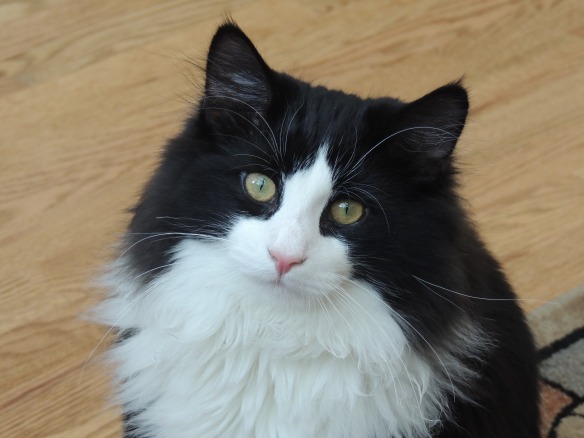 One of Lisa’s favorite pictures of Milo

Having faced an expensive kitty health crisis or two in my own life—including the dreaded urinary blockage—I can certainly appreciate how overwhelming costly veterinary bills can be while you are in the middle of making very important decisions about your pet’s medical care.

If you would like to have your cat/s featured on Let’s Talk About Your Cat, feel free to contact me at purrandroar(at)gmail(dot)com

4 thoughts on “Let’s Talk About Your Cat!”