The National Geographic Live Lecture season will be soon be wrapping up in Toronto and so far the series has been great. Gorongosa Reborn: A Cameraman’s Journal with Emmy Award-winning natural history cinematographer Bob Poole, has been the one lecture I have been looking forward to most since the series line up was announced last year.

The lecture centers around Bob’s recent six-part PBS/Nat Geo International series ‘Gorongosa Park: Rebirth of Paradise’, in which he has documented the come back of Mozambique’s Gorongosa National Park.

Gorongosa has been referred to as one of Africa’s most treasured national parks that in its heyday was home to thousands of animals including some 6,000 elephants and about 500 Lions. Scores of people, including international celebrities, once flocked to the park to view its prolific wildlife up until civil war broke out in 1977. By the time the war ended, in 1992, the wildlife in the park had been all but wiped out, and what hadn’t been destroyed by the war trophy hunters managed to finish off. After the dust had settled in the mid-90’s, the park was surveyed again – they counted a mere 100 elephants. Almost all of the large grazers as well as the predators were gone from the landscape.

Thankfully things were set to turn around for the better, and the rehabilitation of the park officially began when the Gorongosa Restoration Project created a 20 year public-private partnership with the Government of Mozambique to jointly manage the park. Then in 2007 lions were photographed for the first time since 1960 at the ‘Lion House’, wildlife was very slowly and cautiously beginning to return.

Originally built as a tourist camp on a floodplain, the ‘Lion House’ was abandoned due to flooding in the rainy season and later taken over by Lions who were often seen lounging on the roof– Photo by Whitney Leonard/Gorongosa.org

Bob Poole had already spent two years living and filming in Gorongosa and was eager to take on the PBS project, he tells Mother Nature Network that the experience fulfilled a life-long dream for him “I was able to combine my passion for animal conservation with my love of documentary filmmaking.” He goes on to say that Gorongosa is a prime example of what can be done and that is possible to reverse the damage humans have caused, that with effort, “nature can be saved.” A rather positive and hopeful message at a time when we are bombarded almost daily with much of the opposite.

Bob’s love of the park and enthusiasm for his work is infectious, his story telling and passion translates in person and on-screen for an informative and at times very entertaining presentation. It is guaranteed to leave you wanting more, if not determined to visit the park for yourself one day. 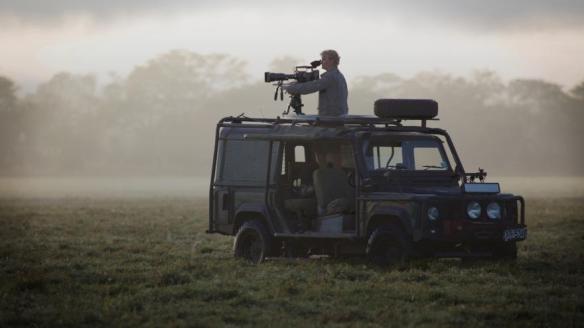 Gorongosa Reborn: A Cameraman’s Journal is for anyone who loves wildlife, Africa, conservation and the idea that people can come together to fix what was once broken if we choose. Among other things you can expect to hear about elephants who haven’t forgotten the war; species reintroduction and breeding programs; and of course the come back of the parks great predator – lions.

Having been very fortunate to visit Gorongosa the presentation brought back great memories, especially the excitement of being in the park knowing the history and seeing what was being done. In particular, it is was wonderful to hear a mention of one very special lioness called Tripod, who at 15 years old is still going strong.

View of Tripods back leg where she lost part to a snare. Image © Tori Dileo

She lost part of one of her legs to snaring and managed not only to survive but to hunt, raise cubs and remain a vital and successful part of her pride. In a way her strength and resilience is very symbolic of Gorongosa and the parks potential for the future. 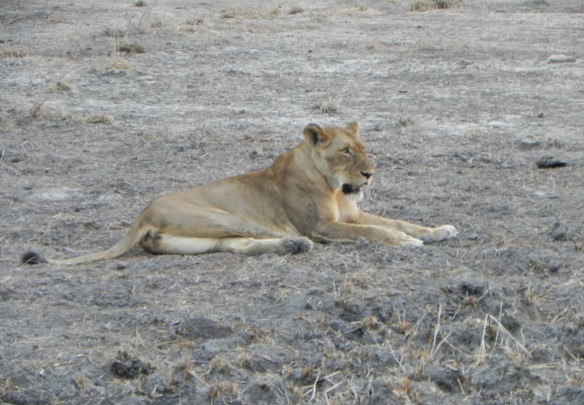 Tripod resting and waiting for one of the males off to the side. – Image © Tori Dileo

While Gorongosa is a story of hope and transformation the park and its wildlife face threats from poaching and snaring; illegal mining and logging; human settlements inside the park; and, the potential of conflict caused by political instability. However even with these challenges, the good news is the park is currently open for business and by supporting tourism there you are helping the park, its restoration, local communities and wildlife. I hope to be able to go back again one day and would recommend it for anyone who is looking for a truly magical and unique place in Africa to visit. 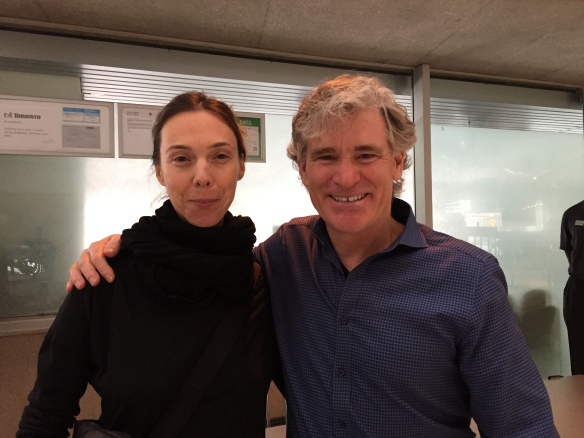 If the story of Gorongosa intrigues you be sure to check the National Geographic Events page to see when Gorongosa Reborn is coming to your city. For those in the U.S. you can catch the full episodes of Bob’s series ‘Gorongosa Park: Rebirth of Paradise’ online at PBS.