It has been said the only difference between a hunter and a poacher is a piece of paper. It is with that piece of paper that the Walter Palmer’s of the world operate, with very little to no consequences for their actions. They also seem to be protected by the law, which is a strange and disturbing concept to most of us.

Emotions ran high again after the news broke that there would be no charges against Palmer in the death of Cecil the Lion but, should we really should be shocked about the outcome? Not at all and, if anything this teaches us that by holding the proper permits, one is entitled to legally hunt and kill a Lion.

Environment Minister Oppah Muchinguri-Kashiri said: “We approached the police and then the Prosecutor General, and it turned out that Palmer came to Zimbabwe because all the papers were in order.”

Unlike Palmer, Zimbabwean hunter Theo Bronkhorst who set up the hunt, was not so lucky. He is accused of failing to stop an illegal hunt when he helped Palmer kill Cecil. Accused by the same government who said they would not charge Palmer because he had obtained legal authority to conduct the hunt. Bronkhorst’s professional hunter license was also taken away and when asked if he was innocent he said yes “I believe our permits were in order … and I still think we are gonna be vindicated.” Bronkhorst has also said collared lions were shot in Zimbabwe every year, adding that five such big cats had been killed in 2015. So was the hunt legal or illegal? Zimbabwe decides who it wants to prosecute and seems to be sending some very confusing messages on where it stands on this case.

Cecil’s head is set to be presented in court as evidence after it was discovered by the police in the city of Bulawayo where it was being prepped for shipment to Palmer in the United States.

Meanwhile Pennsylvania Dr. Jan Seski, another American trophy hunter who made news around the same time as Palmer for allegedly killing a Lion in an illegal hunt in Zimbabwe, flew under the radar. Seski also insisted he had all the ‘papers in order’ and his attorney released a statement saying that he “had engaged in a lawfully permitted hunt”. The Zimbabwe government said no charges have been sought against him, though an investigation was continuing. I bet you can guess what will happened with that. Like Palmer Seski, also a bow hunter, has killed his fair share of wildlife.

With the collective anger focused on one particular man and maybe because Seski’s Lion didn’t have a name, he got off relatively easy, or so it seems.  A quick search shows he is suffering some backlash, although not as prominently as Palmer.

Regardless, Palmer has helped expose the dark, corrupt, greedy and brutal world of trophy hunting to the masses like never before. His name will not likely fade from our collective memory any time soon. UK-based Charity LionAid commented that they were not surprised at the verdict and reiterated that he “was only one of many hundreds of trophy hunters before him who hunted at the thin edge of the law.” They also hint as to why he was not prosecuted, and why Seski would not be either, “If Zimbabwe had decided to prosecute Walter Palmer it would have established a procedure by which future Walter Palmer’s could be prosecuted. That would not benefit Zimbabwe’s hunting operator income streams. “

As long as we have opposing schools of thought on wildlife conservation, the value of wildlife (dead or alive) and, as long as there is money to be made ethics and science seem to be thrown out the window. 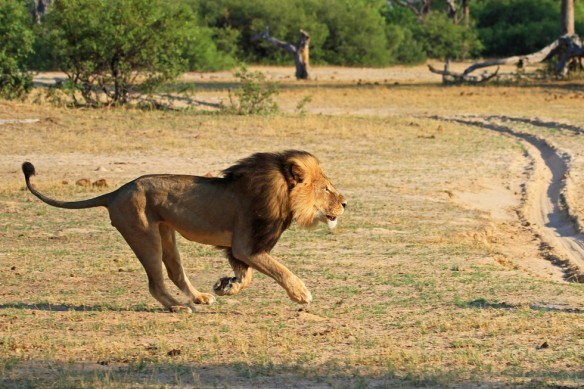 “Whenever people say “We mustn’t be sentimental,” you can take it they are about to do something cruel. And if they add “We must be realistic,” they mean they are going to make money out of it.” – Brigid Brophy

The claim that African Countries make large sums of money off trophy hunting, even though research has proved only 3% off the earnings from hunting companies go to the local communities, continues to come up as a reason why we should allow the killing of wildlife for sport. US hunting groups and hunter of the endangered black rhino, Corey Knowlton have even filed a lawsuit against Delta Airlines for its ban on transporting big game hunting trophies stating that the ban hurts conservation “Tourist hunting revenue is the backbone of anti-poaching in Africa.”

This myth however continues to be debunked and  Emmaual Fundira  who heads the Safari operators in Zimbabwe tells CBS News that the industry is full of corruption. “Americans like Palmer make up the majority of Zimbabwe’s trophy hunters, and part of the huge hunting fees they pay is supposed to go to conservation and community projects…it rarely does.” When asked how much money the government gives to the parks, Fundira replied nothing. “In most cases, you find that the bureaucratic nature of organizations, most of that money may be consumed to a large extent through administration costs and does not necessarily filter directly to conservation.”

An article published in 2011 by Wildlife Extra looked at both sides of big game hunting in Africa with some interesting findings. The study clarified, with an emphasis on West Africa, big game hunting according to conservation, socioeconomic and good governance criteria. I have noted some quick takeaways here:

Trophy Hunting has been marketed as a ‘sustainable’ money maker and for the most part governments, individuals and some organizations seem to have bought it no questions asked. What happens when those animals are gone, or are so rapidly declining like the Lion that there is almost nothing left to hunt? I guess that’s when you start shooting collard Lions around protected parks…

The International Union for Conservation of Nature (IUCN) lists the African Lion as vulnerable with the West African sub-populations listed as “critically endangered” due to over-hunting and dwindling prey. Under the Convention on International Trade on Endangered Species of Wild Fauna and Flora (CITES) African Lions fall under Appendix II meaning as a species they can be commercially traded with restrictions. They are also considered less vulnerable even though they are not threatened with extinction but, may become so unless strict regulations are implemented.

Along with being declared endangered under the Endangered Species Act (ESA), the African Lion would benefit from being listed on CITES Appendix I, whereby trade in a species is extremely strict and commercial trade is prohibited.

While trophy hunters come from all over, the USA remains a major player because they continue to be the number 1 importer (over 50%) of Lion trophies. The flip side to this is that they also have an ability to help Lions by listing them as ‘endangered’ under the ESA, thus enacting a ban on imports of Lions parts and Lion trophies into the country.  This would make it less appealing to spend money on killing an animal that you can’t take home and put on display.

In 2011 a number of US-based conservation organizations petitioned the US Fish and Wildlife Service (USFWS) for an endangered listing for the African Lion. In 2012 the USFWS came back with a Threatened listing, after reviewing all of the ‘best scientific and commercial’ information. They did not find sport hunting to be a threat to Lions, currently.

The public comment period on the USFWS proposal closed January 27, 2015 and a decision is still forthcoming. If finalized the threatened status allows for a loophole, Rule 4 (d), which requires import permits for Lion trophies (parts) from African countries that have ‘scientifically sound’ management plans for Lions. The proposed rule is intended to promote additional conservation efforts by authorizing only activities that would provide a direct or indirect benefit to lions in the wild. There are problems with this rule being that no accurate scientific and independent studies have been completed to determine what Lion numbers are, in either the protected areas or the areas where Lions are hunted. Therefore it can’t be determined what a ‘scientifically sound’ management plans is with no numbers to back it up. Sadly the trend seems to be to ignore science altogether and if that’s the case, actual numbers won’t matter.

While the governing bodies fall pretty short on protecting Lions, and an endangered designations isn’t full proof, it will still afford better protection than what we currently have. Hopefully it would provide Lions with some relief and also give conservation organizations a chance to address the other factors contributing to their decline such as habitat loss, poaching, human wildlife conflict and disease.

Lion numbers are estimated to be at around 20,000, however LionAid actually puts estimates even lower at 15,000, across all of Africa. No matter how trophy hunters spin it they are not helping Lions. The proof is in the numbers, killing Lions doesn’t contribute to saving them.

Currently Australia has put a ban on importation of Lion trophies as part of a crackdown on canned hunting and the EU has suspended trophies from West Africa (Benin, Burkina Faso, Cameroon, and Ethiopia) but failed to pass a ban on trophies from East and South Africa (Tanzania, Zambia, Zimbabwe). This was very disappointing considering the mass of scientific evidence to back up that Lions in all countries, are in deep trouble.

Trophy hunters for the most part I believe, will not be swayed by the compassionate conservation argument, or by the evidence that predators play a key role in maintaining Eco-systems, or that ultimately sport hunting does nothing to protect wildlife or keep local communities afloat. This means it will be up to the rest of us to try to convince our governments and conservation organizations to do what is both morally right and scientifically sound. We must continue to make our voice heard by signing petitions, writing to government, organizations, attending rallies, donating to charities/organizations working to preserve Lions (wildlife) and educating others.

In the meantime LionAid has put together a proposed strategy on how to conserve Lions that should get us thinking on where we go from here. This is the summary for wild Lions, please click on the link above for the full article which also includes a proposal for the captive bred (canned hunting) Lion crisis.

1. Cease all trophy hunting of wild lions. “Sustainable” utilization of lions has been the biggest failure of any “conservation” programme proposed to ensure the survival of any endangered mammal.

2. Count lions via independent scientists. Cease all reliance on vested interest group or range state estimates of their lion populations to further justify trophy hunting off take. Cease any reliance on “indirect” counts and “extrapolations”.

3. If lions are to be considered by any stretch of imagination as a species available for “sustainable off take” let’s do some lion counts where such counts count. In other words in the hunting areas. There has been not ONE such survey in trophy hunting areas. Justifying off take as sustainable is therefore a nonsense.

4. If rural communities are expected to live with lions, implement compensation programmes that are both durable, reliable and sustainable. Any programme that continuously relies on donor input or “tolerance” will fail in the long-term. Government compensation programmes will fail because of an abundance of bureaucracy and an abundance of reluctance to pay.

5. Do better research. A much better assessment of the disease risks that challenge the survival of the few remaining large lion populations is overdue.

The more you delve into the world of trophy hunting the more you see the subtle and not so subtle connections to wildlife conservation. Whether we like this connection or not, for now it seems it’s here to stay. Ultimately this may leave us with more questions than answers on how to work most effectively to save Lions and other wildlife.

Leave a Reply to Purr and Roar Cancel reply