Eagle Scout Robbie Elliott of Norfolk, Virginia has become a local hero for community cats after he had to develop a leadership service project to earn his Eagle Scout honors in 2014. Initially he knew he wanted to do something to help pets and, after visiting the local Norfolk SPCA and learning about their TNR  program to help humanely reduce the number of community cats without resorting to killing them, Robbie decided where he would focus his attention. 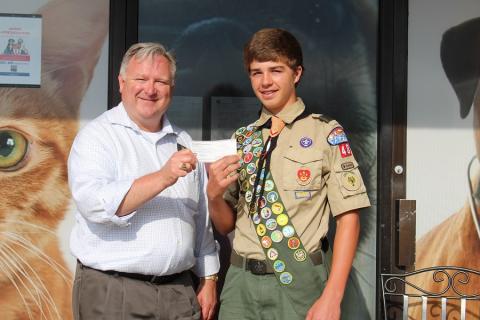 All Image via PetSmart Charities unless otherwise stated

TNR was a very new idea to the Norfolk community but, after PetSmart Charities granted the SPCA there a $62,000 grant in 2012 all that changed. The funds helped fix 1,200 cats and brought awareness to the practice and how it could help reduce the number of community cats by offering free spay and neuter services. Since then the program has grown.

Robbie’s visit to the SPCA made him realize that most people weren’t paying much attention to the cats and with food and shelter being the top two things needed, Robbie decided to focus on shelter.

Robbie researched previous designs and what would best fulfill the needs of the cats enlisting the help of local architect Randy Lyall who donated his services. Together they included some unique elements on the wooden shelters like: a polycarbonate window for natural light, sheltered porch for food and water, a round hole for entry into the house, a one-way door in the back to give cats a quick getaway, and an inside wall to block the wind/rain. The design was also created with the caretakers in mind by ensuring two of the walls and roof were removable, making cleaning the structures easier.

Robbie raised $2,800 and he and his troop built a total of 10 houses, local business donated some of the materials which helped free up $820 which was then donated back to the program to buy food for the cats.

The Chesapeak Clipper reports that one of the local caretakers, Debbie DeMarco,  who was given two of the cat houses says they are a big hit with the cats and that Robbie ” has a good heart – and he did a really nice job.”  Rob Blizard, executive director of the Norfolk SPCA said he was amazed with the time and thought put into the project. “Robbie’s is the deluxe version – the Taj Mahal of feral cat houses.”

Robbie’s project has had a lasting, positive impact as more people have come forward wanting to help the cats. Some people who held negative views on the community cats prior to this project have now seen the benefits of TNR. All the support then allowed for an additional grant from PetSmart Charities of $79,000 to fix even more cats in 2015.

For anyone interested in building these houses, both the blueprints and instructions are available for free. Robbie and the Norfolk SPCA are encouraging everyone to share them to help community cats in all cities.