For the first post of Let’s Talk About Your Cat  I am very excited to feature a cool kitty that I cat sat for a few weeks back, a cat that before our meeting was “cat-napped”, returned home and became a local celebrity in the process!

Thanks to pet mom Tamara S. for sharing!

Q What is your cats name/age/color/breed

A Margaret, Male (but I didn’t know that when I named him), 8yrs, black, medium/long-haired domestic.

Handsome Margaret the cat who came in for Christmas

A Friendly but street smart, Margaret has a legion of fans at the senior’s apartment building up the road. He is an indoor/outdoor cat since he came to me from outdoors.

Q How did your cat come into your life?

A Margaret belonged to one of the seniors in the apartment building up the road. I’m not sure whether his person died, or went into care but Margaret was left out in the parkette across the street from my home where he lived for a summer. Apparently a couple of different people tried to adopt him, taking him away to their homes, but Margaret was all about location and would return to the parkette after each adventure. In the fall of that year, as the weather grew colder, Margaret started coming to visit me in my place. At first he would come in just for a snack and leave again or sometimes he’d stay for a nap. Finally on a cold snowy Christmas eve, Margaret came in and stayed for 36 hours straight and the rest as they say, is history. Obviously, he chose the house, I just came in the bargain.

Q What is your first memory or experience with cats?

A I grew up with dogs, and was terribly allergic to them. The advice was always that if you’re allergic to dogs you’re going to be twice as allergic to cats so I always stayed away from cats. Until I finally spent some time around one and found my allergy wasn’t nearly as bad as my dog allergy. So a cat was sort of compromise animal. I’m still allergic but manage-ably so, and I get all this love!! It’s a good deal.

Q Anything else people should know?

A Recently Margaret failed to return home one night and while it is unusual for him to not show up at the back door at bedtime, it is not utterly unheard of. However when he didn’t return the next day either I started to worry calling all the shelters and rescue organizations and posting on facebook. I began walking up and down my alley calling for him and asking if anyone had seen him eventually running in to a neighbor who said she’d seen the strangest thing, a man and a woman had been chasing an animal nearby, trapping it in a cage and taking it away.

The neighbor said at first she’d though it was a squirrel but then began to realize that it was my cat, she then proceeded to tell them that there were other cats around and maybe they were taking the wrong one, but the “cat-nappers” told her that it was the cat they were looking for. So poor Margaret had been cat-napped!! Later with the help of a friend I made up a series of “Missing cat” posters and put them up all up and down my alley and on the main street nearby. They generated a lot of attention but no Margaret. It was now Saturday and Margaret had been missing for 5 days. This was serious.

I tried to imagine what the people had been thinking. Were they trying to be helpful? Had they thought Margaret was a stray? But he has a tattoo as well as a microchip. Surely if they’d been well-meaning cat rescuers they would have found that out by now and returned him. Did they take him just because he is so beautiful and they wanted him for themselves? Or for some nefarious purpose? This was just too terrible to contemplate.

Please Bring Back My Cat – A case of mistaken identity

I decided to go big. I spent the weekend cutting out giant letters. A stencil that I intended to paint across the entire side of my building. And up I got on a ladder to tape up the big paper stencil. It read “PLEASE BRING BACK MY CAT”.

Anyone who had a heart wouldn’t be able to resist I reasoned. And no sooner had I taped the giant letters up for all the world to see, then a man walked up to me and said “I’m the man who took your cat”. He told me that Margaret bore a striking resemblance to a cat that a friend had fostered several years before, so he had purloined my feline and “returned” him to the person he believed to be the rightful owner.

I told him I was so relieved and that I hadn’t slept for days, both true, and he told me Margaret would be brought back that afternoon. The cat-napper also said that poor Margaret was so scared he had been hiding under the lazy boy for five days and that it had been uncertain as to whether this was their missing cat? No kidding, It wasn’t her cat!!! And so Margaret was returned, a little skinny from his ordeal but otherwise none the worse for wear. A happy ending to a very stressful adventure! 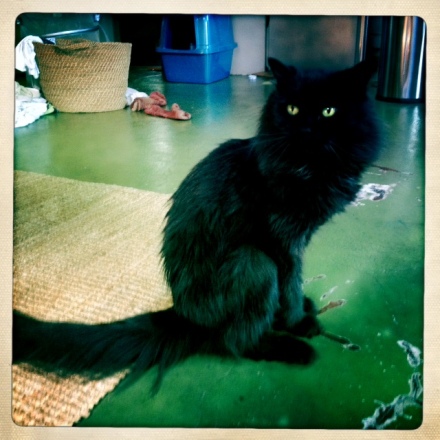 Returned from his adventure looking a little thin

More pictures of Margaret, after the incident, can be seen here.

🐱 If you would like to have your cat featured on Let’s Talk About Your Cat, share a story some pictures and the cat love, contact me at purrandroar(at)gmail(dot)com