Existing only in history books, the Barbary Lion is wrapped in mystery and legend both for its magnificent appearance and uncertain fate.

Barbary Lions (Panthera Leo Leo) also called Atlas Lions, once roamed North Africa’s mountain ranges and were considered the largest of the lion sub-species. Larger than the African Lion that we know today, the males possessed a very distinct, well-known feature  – dark, thick full manes and were thought to have weighed 400 to 600 lbs. 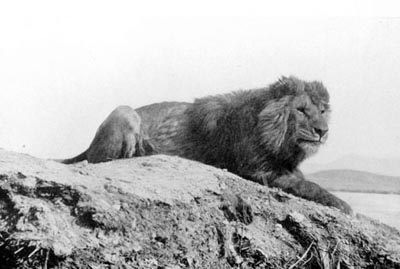 Photo: A Barbary lion from Algeria. Photographed by Sir Alfred Edward Pease around 1893.

Their beauty and power was admired by many from the Royal families of North Africa to the first humans to encounter them, the Egyptians and Berbers. Unfortunately for the Barbary Lion, the Roman Empire stepped in and dealt the species a brutal and bloody blow. The Lions were featured as the main event against Gladiators in Roman arenas, and over a period of 600 years thousands of Lions were killed for entertainment. The species were also considered vermin, hunted down by the Arab empire and European hunters with guns who quickly finished off the last of the wild Barbary Lions. Sounds like a familiar scenario doesn’t it?

Barbary Lions were also taken to European Zoos and even did time in the Tower of London, but the extreme exploitation finally took its toll with the species succumbing and ceasing to exist in the wild in the early 1900’s.

“ Barbary Lions became extinct in Tripoli (western-Libya) as early as 1700, the last known Barbary lion in Tunisia was killed in 1891…in Algeria in 1893.. The last kill was recorded in 1942 on the northern side of the Tizi-n-Tichka pass in the Atlas Mountains, near the road between Marrakesh and Ouarzazat, two major tourist destinations today.” source The Sixth Extinction

Is the Barbary Lion truly extinct? Much speculation surround the possible existence of Barbary Lions with claims coming from Zoos, including the Rabat Zoo in Morocco, around the world who supposedly had them in their collections. In most cases the Lions were determined to be hybrids and not true Barbary Lions.

More recently it was discovered that they share a close genetic link to today’s living Asiatic Lions in India and that the Asiatic Lions could possibly be used to bring back the lost Barbary Lion.