Friends, everyone needs them and sometimes without them one wouldn’t make it. Cats, in many cases are no different from people, so it is no surprise that Jerry and Purr-minator both owner surrenders, would form such a bond.

Jerry originally came in as a bonded pair with his brother Tom, but Tom the more outgoing of the two, got adopted first leaving Jerry by himself. This however wasn’t a negative situation as it allowed Jerry to come out of his shell and gain more confidence, this often happens when you have one dominant and one shy cat in a pair. I have seen it many times and with Jerry it allowed his true personality to shine and it also opened him up to another wonderful friendship – enter the Purr-minator!

Purr-minator, was painfully shy when he arrived at the shelter, a very gentle little guy with a past he wasn’t giving up. He seemed unsure of himself and of people, but with lots of love and socialization he started to come out of his shell. He also found solace in the company of Jerry, so the shelter staff decided to house them together… and the rest is history. 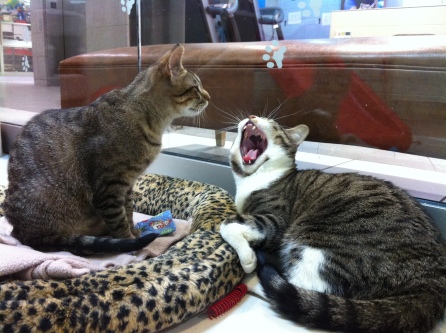 They are a perfect compliment to each other, Jerry the older, wise, calm companion gives Purr-minator the security and confidence he needs. How did Purr-minator get his name? Well when you walk in to greet him he purrs non-stop and has a little trademark trill that goes with it, if you turn your volume up you can catch it in the video on my Cat-stagram feed.

While it wasn’t all smooth sailing for this now bonded pair, getting adopted and returned and Jerry having to be separated from Purr-minator due to a cold, they are back happily together and thriving…the only thing missing is their forever home. 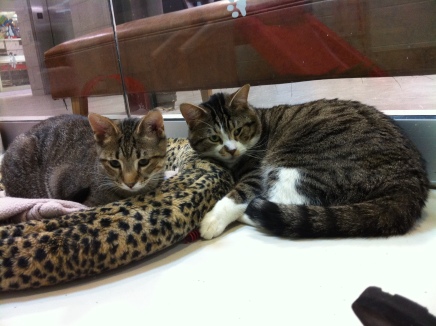 Is it time for a nap?

If you are interested in adopting this sweet pair you can head down to Toronto Animal Services South Region Located at the Canadian National Exhbition Place (416) 338-6668. 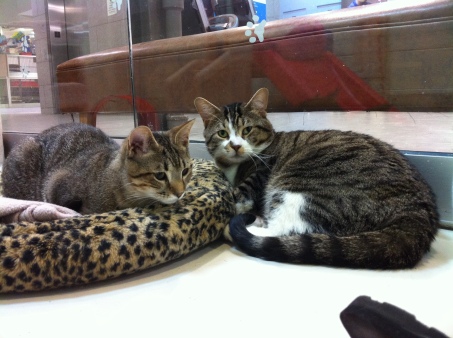 Can you put the camera down so we can get some sleep?

If you live in the Toronto area stay tuned for news on an exciting adoption event coming up! 🐱