South America recently revealed a fossil that is the first ever documented paw prints made by the long extinct saber-toothed cat also known as Smilodon. 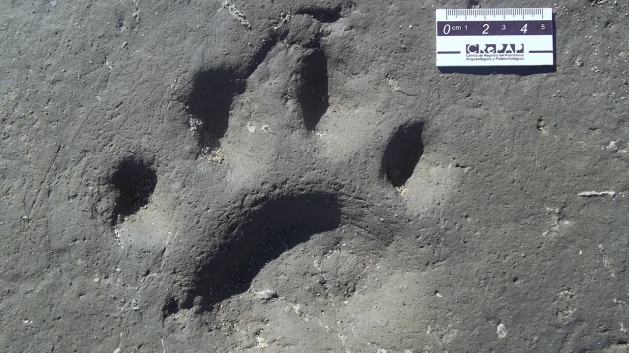 The announcement was made by Paleontologists in Punta Hermengo, Argentina where they are calling the find a “small revelation”. Researchers said that the tracks were likely made by the largest of the three saber-toothed cats Smilodon populator whose paws were about 20 percent larger than that of a Bengal Tiger.

Of the three species of Saber-tooth cat Smilodon populator is similar to but larger than the it’s well-known relative Smilodon fatalis, whose remains have been found at La Brea Tar Pits in Los Angeles – Image Wikipedia

Approximately 50,000 years ago the big cat took a walk through the area and left behind impressions of both the front and hind paws which would end up being preserved in the “fine, grainy sediment”. The prints measure 17.6 centimeters (6.9 inches) in length and 19.1 centimeters (7.5) in width, with the front paw being the larger of the two.

Smilodon populator is thought to have lived only in South America during the Lujanian age, a geologic time period spanning the Late Pleistocene and Early Holocene, and while researchers have said that the paw prints do have very similar morphological features to that of its smaller relative Smilodon fatalis they can’t be 100 % sure which cat they belong to. Due to the difficulty in connecting fossil footprints to the actual animals that made them the tracks will get their own name, based on where they were found in the Miramar region of Punta Hermengo, and be called Smilodon miramensis.