Museums have limited space which means many pieces remain buried away in storage with little chance of being displayed, but once in a while they are re-discovered like the ancient fossil that was recently examined by paleontologists in the Nairobi National Museum in Kenya. Hidden away waiting for its story to be told was a jaw bone from a ‘giant lion’ that had been unearthed decades ago, stored in a drawer and forgotten about until now.

“Simbakubwa kutokaafrika”, which means “big lion from Africa” in Swahili, belongs to a long extinct group of some of the largest terrestrial carnivorous mammals known, Hyainailourine hyaenodonts, which roamed the earth about 22 millions years ago. Despite the name this animal was not a lion or related to the cats, rather it was a member of a group of mammals who had teeth closely resembling a hyenas, even though they are also unrelated. 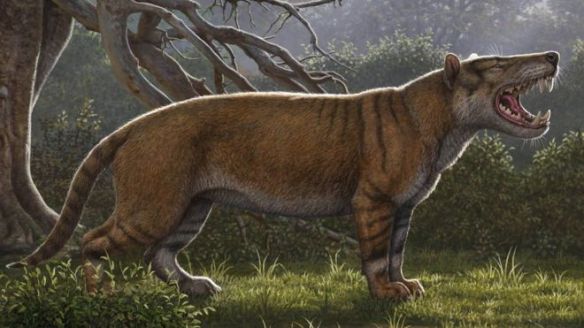 Simbakubwa was estimated to have weighed up to 1,500kg and could have preyed upon elephant-like creatures that lived during the same time.  Image AFP – BBC.com

Simbakubwa wasn’t just any big carnivore, it was significantly larger than a modern lion and polar bear with an equally impressive jaw and blade like teeth to match its super size. In addition to the front canines Simbakubwa had three pairs of meat slicing teeth in the back – to put that into perspective carnivores like the modern lion, domestic cat, raccoons and wolves only have one pair. Conjuring up images of a perfect and frightening killing machine the fossil will serve to help researchers put together the missing pieces of what life and the environment may have been like for these hyper-carnivores and their prey, as well as shed light on why they went extinct.

Hyaenodonts dominated the scene for a long time but ultimately disappeared along with their relatives by the end of the Miocene epoch, approximately five million years ago. Researchers aren’t exactly sure why such a powerful and well adapted species went extinct, but not unlike modern carnivores, Simbakubwa was likely a victim of changes in its environment. They hypothesize that due to this disruption their prey also started to vanish and Simbakubwa soon followed unable to adapt to a rapidly changing landscape.

Paleontologist Matthew Borths tells National Geographic that modern hyper-carnivores like lions and tigers “are among the most endangered mammals we have, and part of the reason for that is they’re so sensitive to environmental disruption”. He goes on to say that since their populations are relatively small compared to other organisms, they suffer most when the food chain begins to destabilize.

Giant lion or not Simbakubwa is still a fascinating discovery with a story that can be taken as a reminder of just how fragile species are and, in the Anthropocene that is something to think about as we try to save modern predators like tigers and lions from extinction.