What do you get when you combine steel, sculpture and jaguars? Beautiful art that captures the spirit of the America’s largest and most endangered big cat.

The Spirit of Macho B – Image Patricia Frederick on Facebook

Arizona based Equine Veterinarian Patricia Frederick, who retired to become a sculptor, creates an array of creatures out of steel. Although she initially concentrated on her first love horses, her extensive work includes the likes of dogs, cats, wolves and jaguars. She began her sculpting career working in clay then moved on to ceramics while obtaining a degree in painting. Later she took lessons in bronze sculpturing, and fell in love with it, but soon found that steel was more affordable and available making it her favorite material to work with.

Patricia tells the Tuscon Weekly that she doesn’t do “extreme realism, but rather takes a contemporary approach to capture “mobility and motion”. She starts by sketching the contours of the bones followed by an all-steel armature essentially “drawing with steel”.

The life-size sculptures completed in January capture the power, strength and agility of two very well-known jaguars Macho B and Corazón commemorating their lives as well as bringing much-needed attention to the plight of this magnificent cat that is literally hanging on by a thread. Macho B, who lived in Southern Arizona, was estimated to be about 16 years of age when he died surrounded in controversy. Until 1996 no jaguar to be seen in the U.S. and that was the first time Macho B, along with another unknown male were documented along the border. 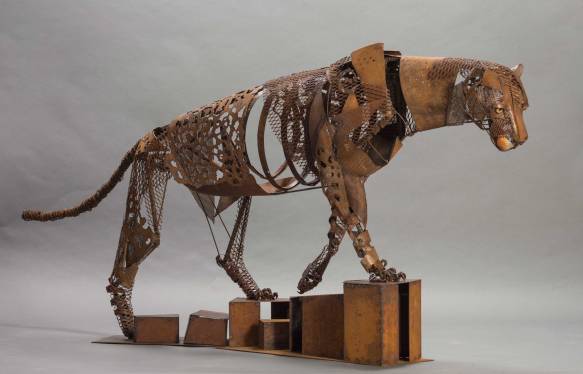 In 2009 Macho B had been caught in a snare set by researchers hoping to collar him, however things went very bad and he suffered greatly in a panicked attempt to escape. After 12 days he was found alive and recaptured but then “euthanized based on a diagnosis of kidney failure”. The situation read like a crime drama and The Arizona Republic reported that Macho B died from being mishandled and because he had become a victim and pawn “in a web of intrigue involving environmental politics, border security, greed and scientific egos.”

Corazón, named for the distinguishing heart shape mark on her left shoulder, lived in Sonora, Mexico, in the Northern Jaguar Reserve 125 miles south of the U.S.-Mexico border. She was poisoned and her body burned on a private ranch. Researchers found that the tracking collar she wore was also destroyed, she was about 8 years old at the time of her death, and had a cub that would not have been able to survive without her. While killing a jaguar is illegal and Mexican law protects them, it does not stop the killing and no one has been prosecuted for the death of Corazón or any other jaguar. She had first been seen in 2006 as a young animal would be photographed on camera traps 30 times during the next five years becoming an icon to those seeking to expand conservation effort.

Patricia’s work is not only beautiful it has a distinct purpose each piece with an individual story to tell. They are meant to draw the viewer’s eye and attention, encouraging people to think about the highly endangered big cat and the adversity they face from habitat loss and fragmentation, poaching, agriculture, persecution, misconceptions and finally border walls. The jaguars of steel will endure, but the real animal will not if the species does not get the support and protection they need.

Both sculptures can be seen on tour which goes through 2017 and, if you would love to have one to display at home either indoors or outdoors, they are up for sale with all proceeds from these unique pieces being donated to both Sky Island Alliance and the Northern Jaguar Project.

For more information and to help support jaguar conservation efforts or make a donation please visit either Sky Island Alliance or the Northern Jaguar Project.