For those of you who follow Purr and Roar on Facebook you would have seen this post this morning. At first glance I thought it was fake, but turns out to be an unbelievable, legitimate, sighting. If there weren’t the photos to back it up no one would believe it. Article as published in BBC News. Enjoy!

A never before seen sighting of a lioness, called Nosikitok, a mother to her own three cubs born in June, spotted nursing a leopard cub thought to be about the same age as her own cubs. 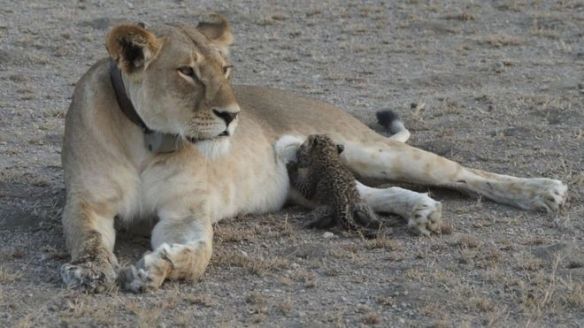 This is unheard of as lions and leopards are natural mortal enemies, most lions will kill leopard cubs if given the chance as a way of eliminating the competition. The lucky person who photographed the pair was Joop Van Der Linde, a guest at Ndutu Safari Lodge in Tanzania’s Ngorongoro Conservation Area. 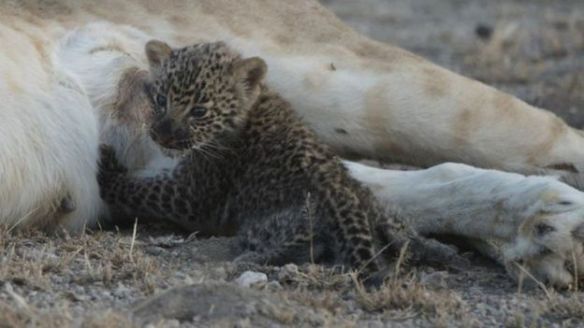 The lioness is fitted with a GPS collar and is part of the KopeLion project which aims to “to foster human-lion coexistence in Ngorongoro Conservation Area.” Unusual animal pairs are not uncommon but this is something that has baffled and surprised the experts.

Dr Luke Hunter, President and Chief Conservation Officer for Panthera, a global wild cat conservation organization which supports Kope Lion, told the BBC the incident was “truly unique”. He also goes on to say that he is not aware of this type of relationship having ever occurred between different species of big cats. 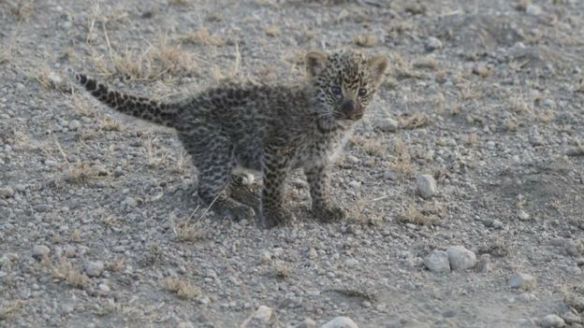 The local safari lodge says that there is a resident female leopard in the area who they think may have cubs. With luck, the tiny leopard will soon be back with its natural mother – Image © Joop Van Der Linde/Ndutu Lodge

Dr Hunter says that she found the leopard cub not far, about a kilometer, from where here own cubs are hidden. “She’s encountered this little cub, and she’s treated it as her own. She’s awash with maternal hormones, and this fierce, protective drive that all lionesses have – they’re formidable mums.”

They are anxiously awaiting the outcome and, fingers are crossed that this little leopard finds his or her way safely back to mum.

7 thoughts on “The Lion and The Leopard”