Many years ago on a trip to Kenya I was very fortunate to see a serval on a night drive in Amboseli National Park. The image while grainy reminds me of how beautiful, elegant and perfectly camouflaged this animal is for its environment. It was the cats glowing eyes that gave it away and, as we stopped to watch, he or she turned around and gave one over the shoulder glance before silently padding off into the tall grass under the cover of darkness.

Servals (Leptailurus serval) are a medium-sized lesser cat, not to be grouped with the bigger cats even though they have been called miniature cheetahs, weighing between 30 to 40 pounds. Some of their distinguishing characteristics include tawny coats with black strips, splotches, spots, and, large oval ears which enable them to detect the slightest sounds and target small prey animals in the grass or in the ground. They also have the longest legs, which make them excellent acrobatic jumpers and hunters, for body size of any of the cats and are most at home in grassland and moist habitats such as reed beds and marshes, but are found in a variety of habitats throughout Africa except tropical rain forests and the Saharan desert. In North Africa a few isolated populations are said to exist in both Morocco and northern Algeria but it is thought they number less than 250 individuals, isolated in vulnerable sub-populations of fewer than 50. Therefore it is generally recognized that servals are critically endangered north of the Sahara.

If spotting a serval is lucky then catching a glimpse of the very rare melanistic serval is magic and, there are only 4 locations in Eastern Africa where you might be able to have this experience.

Image © Alison Mees – “Interestingly, the serval spotted by Mees was foraging in the lowlands of  Tanzania’s Serengeti National Park suggesting that either these black cats are moving out of the mountains, or they are spreading their melanistic genes to populations that live at lower elevations. We’ll leave that to the experts to figure out.” via Earth Touch News Network

Melanism is a genetic condition in which an animal has an increased development of black pigmentation in the skin and hair, and even though the cause of  the condition still remains unknown, it is thought that the darker coloration helps retain body heat and provide a type of survival mechanism. Many other feline species, including bobcats, have exhibited melanism and it appears in about 13 of the 37 known feline species worldwide. 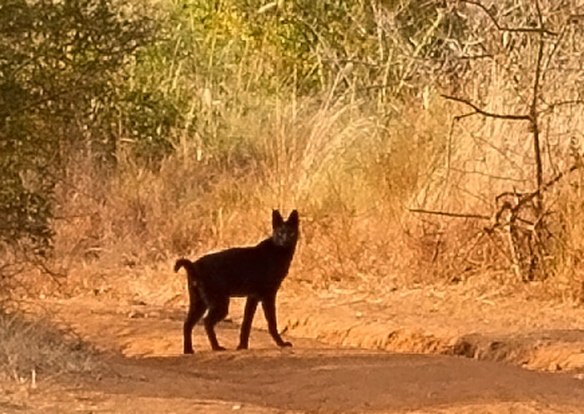 Servals are typically a solitary species with pairs only coming together for a few days to mate. The female will give birth to a litter of kittens approximately 74 days later and about a year later she will chase her young from her territory allowing female offspring to stick around a few months longer than the males. Seeing two servals together wouldn’t be surprising if you happen to be at the right place at the right time, however if you happen to witness the meeting of a regular colored serval and a melanistic serval – that would be something truly special and rare.

This is exactly what happened to Jeremy Goss, conservationist and wildlife photographer, while on a night game drive in Kenya. It was unclear if this was a courtship or simply two servals greeting one another, regardless the photographs and video show an unforgettable meeting between the two cats. 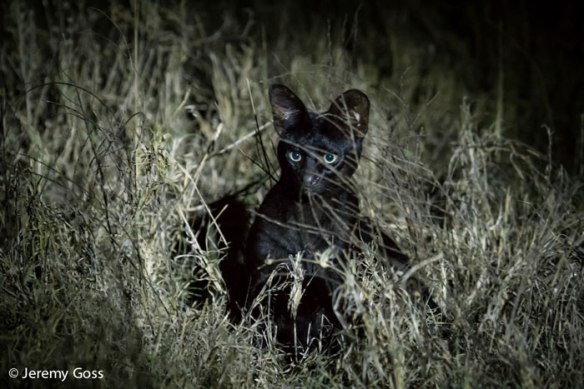 Servals are listed on CITES II appendix, which prohibits international trade without a permit, and they are currently classified as least concern on the IUCN Red List. While they are not generally considered an endangered species they are suffering like all other of the wild cats.

The primary threats come from the bigger cats like leopards, dogs and most notably the ever-growing human population. Servals are poached for their beautiful coats, which are used for ceremonial and medicinal purposes, and even for their meat which is considered a delicacy by some African tribes. Fragmentation and loss of wetland habitat means loss of main prey sources like rodents, this in addition to the burning of grasslands, overgrazing by livestock and persecution by farmers, who consider them a threat to livestock, are also greatly contributing to their demise. Servals rarely take anything larger than a bird and do not pose a threat to humans but are often wrongly blamed for killing sheep and chickens.

Even though servals are not protected over most of their home range, hunting is prohibited in some of their range countries, there is no conservation plan in place but it is clear that any would be welcome to help better understand and ensure a future for this unique and elegant feline.