In the fairytale Cinderella all ends well when the heroine gets her glass slipper and prince charming… but what if the story was re-written, with the part of the heroine being played by a Tiger?

Zolushka, which translates to Cinderella, was found as a cub by a pair of hunters alone, starved and frostbitten in the Russian Far East in February of 2012. She immediately caught their attention in the snow because she was lying in plain sight making no attempt to conceal herself, she was displaying very abnormal Tiger behavior. It was thought she had been orphaned and left to die, her mother most likely killed by poachers. 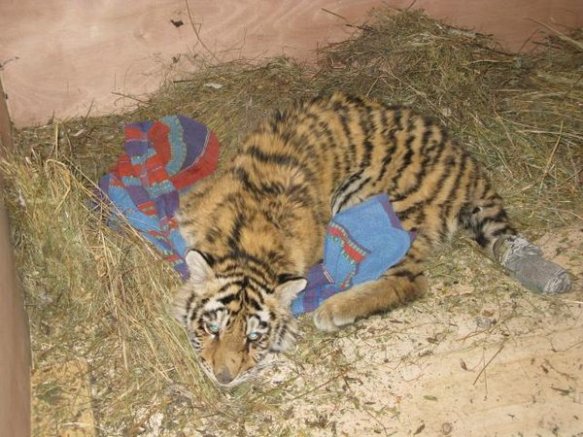 The 4 month old rescued cub named Zolushka after she was found and had surgery on her tail. – All Images via Smithsonian.com unless otherwise stated

The hunters took her to a local wildlife inspector who determined that the little cub was in terrible shape, not only was she hungry but her frostbite was so severe that the tip of her tail was black. Once Zolushka was stabilized the wildlife inspector reached out to  scientist, and Director of the WCS Russia Program, Dale Miquelle for help.

Surgery was performed to amputate the tip of her tail which was necrotic and she was moved to the Center for the Rehabilitation and Reintroduction of Tigers and other Rare Animals. Here they could do two very important things: teach a wild Tiger to hunt and ensure that the animal would not be habituated to humans.

While the idea of rehabilitating and releasing big cats back to the wild is nothing new, its been done with  bobcats and lynx in North America and in India with Bengal tigers, it has its share of controversy and risks especially when a released animal attacks people or livestock.  As Miquelle told the Smithsonian.com “The risk of having a conflict tiger could easily set back tiger conservation in the region a hundred years.”

In the case of the highly endangered Amur Tiger the benefits out weighed the risks: leave orphaned cubs for dead or raise them so that they could potentially mate with wild Tigers and give a boost to the population. 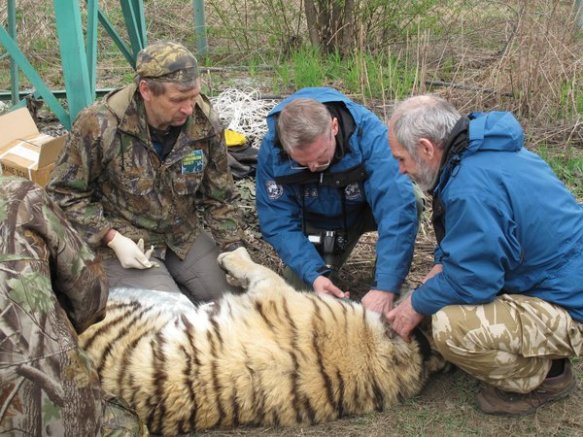 Zoluska readied for release – A successful program could then be a model for other scientists around the world to use.

Zolushka would be the first Tiger to go through the rehabilitation process at this facility “It was like a kid trying to figure out a puzzle,” says Miquelle, who was a periodic visitor to the center in those weeks. “She got it, but it took a little time.”

In May 2013 the healthy Tigress was ready for freedom

It was determined she would be released into territory that had not seen Tigers in decades and that’s what made the Zolushka experiment so interesting and groundbreaking, it was an opportunity to actually “recolonize former tiger habitat, which was totally unheard of.”

Initially Zolushka was tracked via GPS collar and camera traps after her release and the follow-up showed that she was successfully surviving and making kills. Months later when her GPS collar stopped working they worried about her fate, fortunately they were able to use camera traps and the collars data to help pin down her location in the same reserve.

Zolushka captured by camera traps shows that she is strong, healthy and thriving in the wild

The camera trap images showed the scientists proof that Zolushka was doing well and that a second Tiger, a male who they named Zavetny, also occupied the same territory. Adding to the excitement was the discovery of  “hump tracks”— evidence that two Tigers have mated.

“It would be a milestone: the first rehabilitated tiger in history to mate and give birth in the wild. Miquelle smiled. “Wouldn’t it be amazing?” he asked.

It is unknown at this time whether Zolushka has had cubs, but it is hoped that one day soon the camera trap will reveal photos of her with a line of cubs trailing behind, perhaps like the ones seen in A Family Portrait. For now it seems this Cinderella is living her fairytale complete with freedom and a prince charming of her own.