When a photograph of a lone male Ocelot was snapped south of Tucson Arizona, in the Santa Rita Mountains last year it was cause for celebration and controversy. It turns out that this protected and endangered wildcat was photographed in an area where a Canadian based mining company had planned to build the US 3rd largest open-pit copper mine.

The male ocelot, photographed on May 14, is the fifth to be documented in Arizona over the past five years. – Source Tuscon.com

The Ocelot was photographed twice in 2014 with a remote-sensor camera operated by the University of Arizona, the same camera that had also taken pictures of an adult male Jaguar near the mine site.

The Santa Rita jaguar…the only known jaguar in the US roams the Santa Rita mountains, a large portion of which would be destroyed by the Rosemont Copper project. – Source Rosemont Mine Truth

“The discovery of the Ocelot in April prompted the US Fish and Wildlife Service to reexamine its 2013 biological opinion that the Rosemont Copper mine would not unduly harm habitat for endangered species in the area, including the only known Jaguar in the US” source LA Times 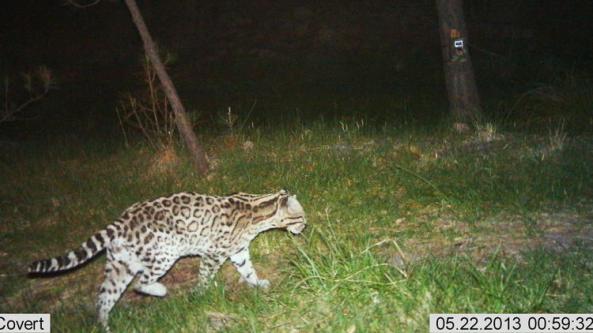 Conservationists fear a proposed copper mine would destroy important habitat for this endangered ocelot, jaguar in southern Arizona. (US Fish and Wildlife Service / University of Arizona) – Source LA Times

In the article published by the LA Times conservationists led by the Center for Biological Diversity based in Tucson said they have their minds made up. “The science is clear,” said Randy Serraglio, a spokesman for the center. “The Rosemont mine cannot coexist with Jaguars, Ocelots and other endangered wildlife whose survival is on the line. Beyond that, we may be witnessing the results of the good work the USFWS has done by making it illegal to kill jaguars and Ocelots,” he said. “Why would we want to turn our backs on that?”

A final decision has not been made, but the Rosemont copper mine faces obvious opposition for the devastating impacts it would have on wildlife, the water, air and the economy. A Facebook community called Rosemont Mine Truth was established and aims to provide the facts, source documents and truth behind this project.

Only time will tell if this Ocelot will be able to help put a stop to the Rosemont mine project and in a story of little cat vs big mine, I know exactly who I’m rooting for.

2 thoughts on “Little Cat vs Big Mine”