Botswana’s Chief’s Island in the Okavango Delta is home to some spectacular wildlife, and if you are lucky enough to visit you may even get a glimpse of some very special big cats. The Lion prides that call the Delta home contain some rare and unique female pride members who just happen to have manes. 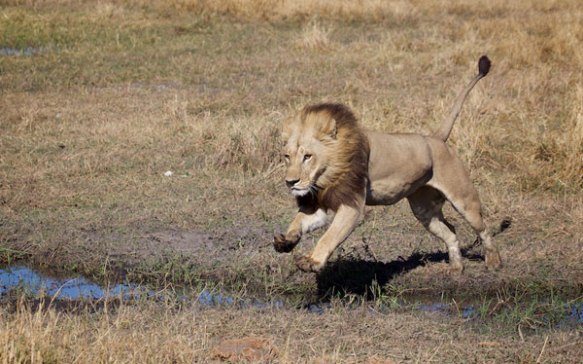 Maned Lioness and a safari favorite known as Martina, was last seen in 2002 in the Mombo region of the Moremi Games Reserve in the Delta but, since then the area seems to have been a hot spot for these unique felines. It is thought that the Lions in this area carry a genetic predisposition towards the trait and could be related. Mmamoriri, or The Hairy Princess, who resides in the same region, has garnered a lot of attention and has also become the first maned Lioness to be studied.

While maned females look different they are still seen by their prides as a Lioness. In fact, they may be seen as both providers (who bring down prey) and protectors (predators see them as male Lions).

Mmamoriri, the maned Lioness, being greeted affectionately by the other Lionesses in the pride. © Robynne Kotzee – Image Africa Geographic

Theory suggests that the trait can be attributed to a disruption of the embryo at either conception (genetic contribution from the sperm was abnormal and caused a female to have male characteristics) or, when in the womb (the fetus was exposed to high levels of male hormones). In 2013 Simon Dures a PhD researcher on the genetic diversity of Lion populations in northern Botswana, and Dr. Erik Verreynne conducted the first ever physical examination of Mmamoriri. At the time of the study her pride consisted of a “single male, five females and two cubs approximately three months old.” 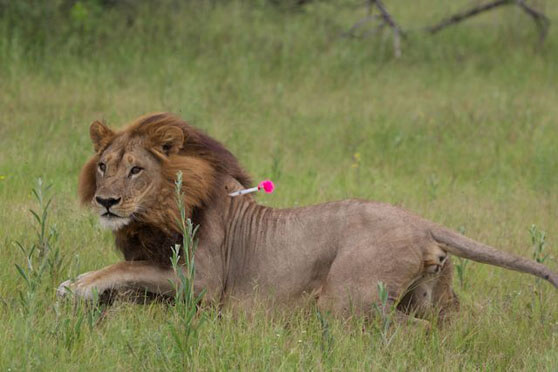 Mmamoriri the Lioness, being darted for study, demonstrated both male and female behavior. Image – Wilderness Safari’s

Mmamoriri was sedated and her measurements taken along with a blood sample for a full genetic and hormonal analysis. During the examine it was noted she had fully intact female genitalia, however they could not determine if she had undescended testicles.

The research around Mmamoriri is still ongoing but the blood work revealed that she is ‘genetically’ a female (that happens to have male features). Simon Dures told Africa Geographic that the trait could be due to a genetic condition which resulted in exposing the developing fetus to excess male hormones in the womb. This would also lead to male characteristics like a mane or larger than average body size. 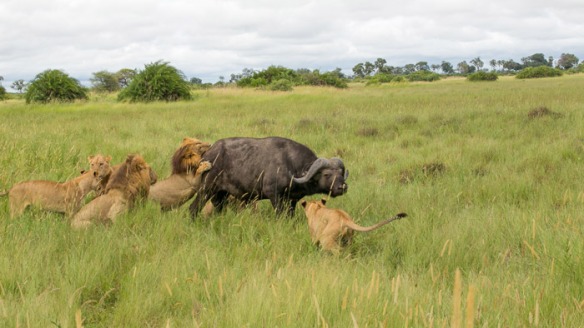 Mmamoriri is the maned Lion hanging onto the back of the buffalo – her larger size was reported to be an advantage while hunting large prey and defending kills from hyenas. © Kai Collins – Image Africa Geographic

Data from the study has revealed that Lions in the Okavango Delta are more isolated than other Lions in Botswana which means there is a limited amount of new genetic material coming in. Over time the isolation may cause traits like Mmamoriri’s to increase and if she, and any females like her, are proven to be infertile it could become a problem for Lion populations in the area. Simon Dures states that “any Lions with the condition are essentially removed from the gene pool, reducing the breeding population, and thus increasing the risk of population decline.”

Lions in the Okavango Delta face pressures from human-wildlife conflict outside protected areas, retaliatory killings for cattle predation and, in the northern section of Chief’s Island they also have to contend with rising water levels which play a role in keeping them isolated.

While this unique and fascinating trait exhibited my Mmamoriri and those like her is not an immediate threat to the Lion population, it will be vital to ensure wildlife corridors are properly maintained to allow these predators to move freely to and from new areas bringing with them fresh genetic material that will enable their survival.

Video of the Western Pride at Little Mombo on Chief’s Island with their two cubs, about three months old, and the maned lioness, Mmamoriri seen on the right.

Maned Lionesses have been documented in the Serengeti and also in captivity. In 2011 a 13-year-old Lioness at the National Zoological Gardens of South Africa began growing a mane. The Lioness, named Emma, was examined and it was found that she had elevated testosterone levels, after her ovaries were removed (the cause of the extra male hormone) she gradually lost her mane.